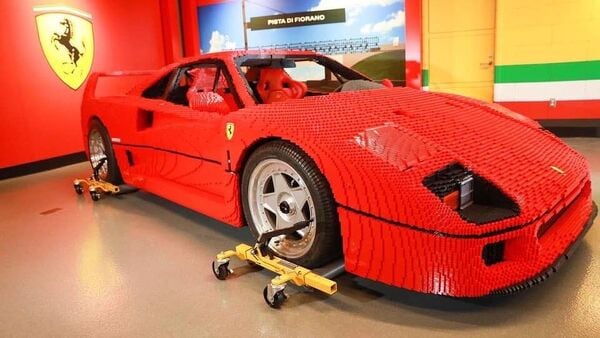 A life-size Ferrari F40 built with 358,000 bricks has arrived in California, which is the first-ever Ferrari F40 Lego model. The supercar is one of the most popular ones the Italian iconic brand rolled out during the 90s. It took around 3,700 hours to be built, claims Lego. The designer team spent around 1,800 hours developing the model, while another 1,900 hours were used to build this.

Legoland California has posted the image of the life-size Ferrari F40 Lego model that weighs 1,361 kg. Just like the real supercar, the Lego replica comes measuring 4,300 mm in length, more than 1,800 mm in width, 1,200 mm in height and it also has a wheelbase of 2,400 mm. Not only the external structure but the interior of the Ferrari F40 replica too comes built with Lego bricks.

Lego claims that the Ferrari F40 life-size toy replica will be available for viewing in the garage area of Legoland Califonia's new interactive attraction, Lego Ferrari Build and Race. It also claimed that enthusiasts and Lego builders will be allowed to take pictures with the supercar replica and even sit inside it as well.

This is not the first time Lego has built a life-size car using lakhs of Lego bricks. Previously as well, the company built such models and kept those for a display to the public and enthusiasts.