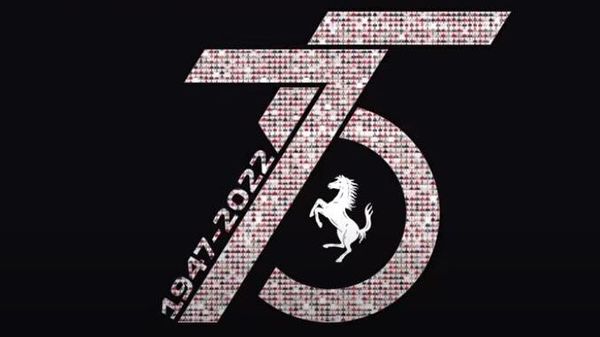 The new is claimed to have been handcrafted by the Ferrari employees.

Italian sports car manufacturer Ferrari is celebrating its 75 years with a special anniversary logo. The automaker has released a new video featuring the new logo that symbolises the iconic automaker's 75 years of glorious history.

This comes as a reminder of the fact that Enzo Ferrari set up shop back in 1947. His first car was the Auto Avio Costruzioni 815 from 1940, but the 125 S race car was introduced seven years later, which was the first Ferrari-badged model in history.

The logo has been revealed right ahead of the end of the year 2021. Also, it comes at a time when the year 2022 is going to be a very important one for the Italian brand on both road and motorsport fronts.

On the road vehicle front, Ferrari is readying to launch the Purosangue SUV, which will focus to capitalize on the growing popularity of high-end luxury SUVs. The automaker will also launch a convertible version of the 296 GTB in 2022. It would carry the GTS nomenclature while retaining the plug-in hybrid V6 engine from the coupe.

There will be a more powerful naturally aspirated V12 engine to outperform the 830 hp power output generating 812 Competizione, as Ferrari has already confirmed. It might be unveiled in 2022. However, there is no confirmation about the unveiling of this car in 2022.

On the racing front, Scuderia Ferrari hopes that its upcoming Formula One race car will finally be competitive again and lock horns with rivals such as Mercedes and Red Bull under the new regulations coming into effect.

The car brand is also readying additional Icona models as a follow up to the Monza SP1 and SP2 Speedsters and the recently introduced Daytona SP3. It is working on the 2023 Le Mans Hypercar (LMH) project as well.

Apart from the new products getting ready to be introduced, Ferrari is also revising its management lineup.