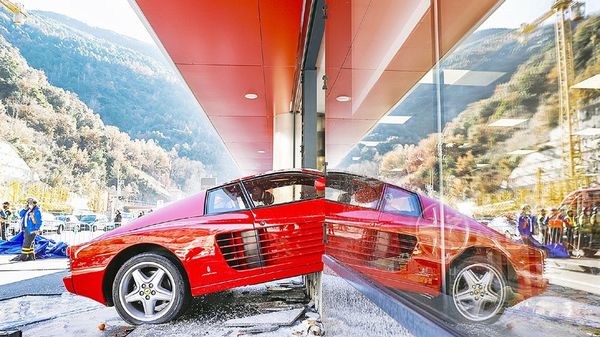 The Ferrari 512 TR was severely damaged due to the crash. (Image: Twitter/Diari d'Andorra)

Driving a high-performance sports car might be fun, but controlling a mean machine like that is not at all easy. Things become even tougher on congested roads. Exactly this happened in Andorra when a Ferrari 512 TR with an 82-year-old man behind the steering crashed into a shopping centre right before Christmas.

Being the biggest festival before the year ends, the shopping centre was full of customers. The crash left the driver of the sports car, a 59-year-old female passenger and a 44-year-old shopping centre worker injured. A report by Duara d'Andorra reported that the crash occurred in the Sant Julià de Lòria of the tiny country during the middle of the day.

The Italian exotic high-performance car was running north past the shopping centre when it hit a road barrier, careening across multiple lanes and finally slammed into the shopping centre through a large window. The report said that high speed was probably the reason behind the crash.

While the three-person injured due to the crash had a minor injury, the car itself suffered extensive damage. The front profile of the bright red coloured Ferrari 512 TR took the brunt of the impact and the bumper of the car has been completely torn off. The hood too has been mangled due to the severe impact. The underbody too has received significant damage due to the crash.