The new electric e-C4, which is being manufactured in Spain, will be the first Citroen model to have a fully electric version developed on the French group's new e-CMP platform.
By : Sabyasachi Dasgupta
| Updated on: 18 Jun 2020, 11:13 AM 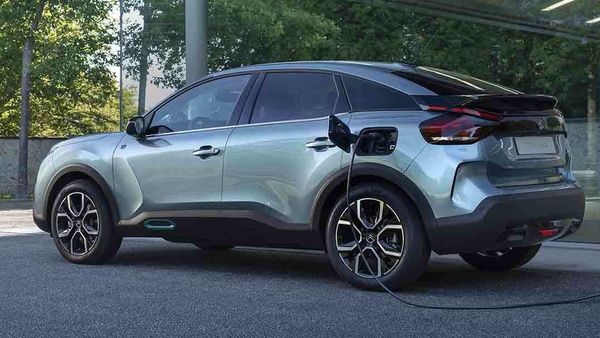 The new Citroen C4 with an all-electric version will be officially launched on June 30.

The Citroen C4 is back with an all-electric version called e-C4, besides the regular petrol and diesel versions. The French carmaker is all set to launch the new C4 on June 30. However, before the official launch, Citroen revealed key details about the new electric vehicle.

The new C4, which is going to replace Citroen’s C4 Cactus as part of the company’s global line-up, will retain the crossover looks and styling cues from previous generation. The front has the upper LEDs connected to the grille, while the main headlights are just below and occupy a good space in the front. From the sides, the new C4 will have tilted roofline that harks behind to a C6 sedan. At the rear, it brings creases with flashlights connected by a black bar, in addition to bringing an LED strip and an airfoil cutting the rear window.

Its interior is not as different from Cactus. Among key changes in the interior is a larger, wider touchscreen. It has a horizontal multimedia centre, which remains floating, but is now more integrated into the panel due to the black piano finish that goes from the physical buttons to the right side of the display. It comes equipped with a digital instrument board, using a colour screen, instead of the monochrome scheme. The steering wheel is also new and appears thinner than the current one.

The new electric e-C4, which is being manufactured in Spain, will be the first Citroen model to have a fully electric version developed on the French group's new e-CMP platform, which it will share with the Opel Corsa-e, the Peugeot e-208 or the DS3 Crossback e-Tense.

The steering wheel of the new Citroen C4 is new and appears thinner than the current one.

The company has not revealed any detail about the electric powertrain yet. However, it is reported that the e-C4 could inherit the same powertrain from some of the group's other electric models. The 100 kW (134 hp) electric motor can produce 260 Nm of maximum torque powered by a 50 kWh lithium-ion battery pack. As for range between recharges, the new Citroen e-c4 could cover up to 310 kilometres according to the WLTP cycle.