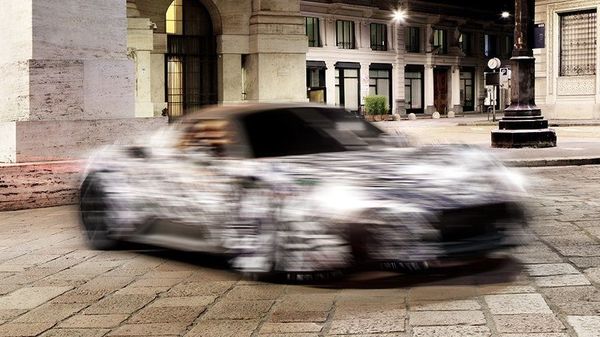 Maserati has started road testing the first prototype of MC20, a super sports car which will be unveiled in May this year. The MC20, spotted in a camouflage, was photographed at night at the famous Piazza degli Affari in Milan, Italy.

Taking to Twitter, Maserati has shared a set of blurred photos of the new MC20, without giving away too much detail about the brand new sports car. The photos were taken during a test route that was driven with a prototype.

The tests, which will be carried out both on the road and on the track, will be useful to collect data and impressions for the final development of the model. In the next few days, the camouflaged prototype of the MC20 will appear in other symbolic places in the country, before returning to the Maserati Innovation Lab in Modena.

MC 20, a two-seater sports car, will be offered with both a thermal engine and an electric version. It will be the first model to mount a new family of engines, which will subsequently be used on other models in the Trident range. The MC20 is also likely to sport a new monocoque carbon chassis, with the engine located in the central-rear position.

According to reports, the MC20 would be powered by a turbocharged 3.6-litre V6 engine capable of producing over 600 hp of power. It will also be available in a fully electric version. Hybrid variants could also be in the pipeline and one of them could even take advantage of two electric motors at the front to develop more than 700 hp, all in all-wheel drive.

The MC20 will be produced in Modena, Italy. It is expected to be launched at a price of around € 200,000. It is the first time that Maserati will use the name 'MC' in any of its car since the legendary MC12 was born 15 years ago.

The first pictures from the tests of the future sports car appeared in November last year. The company had then brought the sports car to the road disguised as Alfa Romeo 4C. However, it is possible that the final version of MC20 will have some more design changes than what appears under the camouflage.