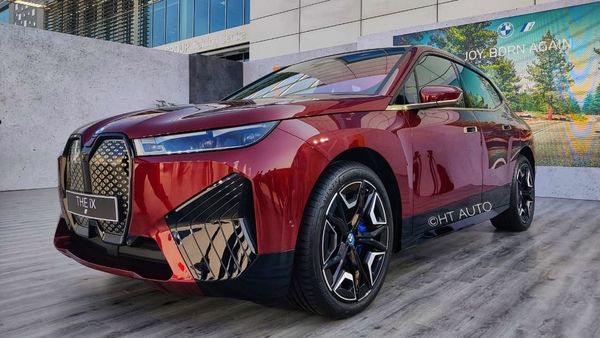 The German luxury car brand BMW has launched its fully electric SUV BMW iX in India. Priced at ₹1,15,90,000 (ex-showroom). the BMW iX SUV will compete with rivals such as Audi e-Tron, Mercedes-Benz EQC and Porsche Taycan in the expanding luxury electric car market in India. The BMW iX electric SUV comes with a five-star safety rating by Euro NCAP.

Speaking about the design, the front fascia of the BMW iX grabs attention easily with its imposing styling. It gets BMW's large kidney grille with a black theme, flanked by sleek LED headlamps with dual-beam appearances. The front bumper gets blue accents pointing at the SUV's all-electric characteristics. The bonnet too comes with a sculpted and masculine appearance.

Moving to the side profile, BMW iX gets sporty alloy wheels, black side body cladding with blue accents, black glass area. The rear profile too comes bearing sleek LED taillights, a sporty roof spoiler, and a black bumper with blue accents. A sloping roof adds more style to the SUV.

Inside the cabin, BMW has given the iX all-electric SUV a minimalistic approach with sleek styling. Instead of a separate instrument cluster and infotainment display, the dashboard gets a large digital display that combines both driver display and infotainment screen as well. The multifunction steering wheel comes with soft-touch buttons and scroller wheels.

Other design elements and features include a centre console with touchpads instead of buttons, premium leather seat and upholstery materials etc.

Power for the BMW iX is generated by two electric motors fitted to the front and rear axles. The electric SUV is capable of accelerating from 0-100 kmph in 6.1 seconds.