Audi A8 L Security has been launched in Russia.The sedan boasts of high-end features like nozzle fitments for fire protection, guards against sniper fire and protection from hand grenade explosions.The car can drive up to 80 kilometers at 80kmph even on completely deflated tyres.
By : Shubhodeep Chakravarty
| Updated on: 13 May 2020, 17:08 PM 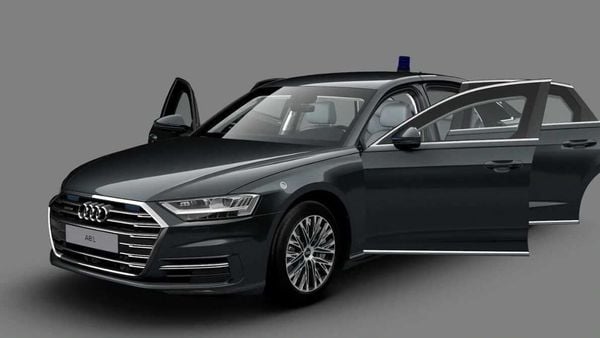 Audi recently launched the A8 L Security in Russia, a sedan which boasts of massive protective equipment that would make it one of the safest fortresses on wheels anywhere in the world.

The much-acclaimed sedan has been brought out without any announcement but its security features - elaborated on Audi's Russia website - more than make a solid case for itself. Weighing in at 3,875 kilos courtesy the extra layer of armour all around, the A8 L Security boasts of nozzle fitments on the underbody, wheel housings, fuel tank and under the hood for protection against fire. The car has been put to the test against sniper fire, hand grenade explosions and rapid fire, and also incorporates an armoured box in the trunk that comes complete with electronics for intercom and an additional battery.

The outer lower part of the interior is made of antimagnetic material.

(Also read: This Limousine-version of Range Rover is a bulletproof fortress on wheels)

In case of chemical/gas attack, the car features a system by which breathable air can be circulated inside the vehicle for a specific period of time. There are two ccylinders of compressed air fitted for this purpose.

In case of emergencies, doors cannot be operated in the usual manner and an onboard pyrotechnic system would generate an explosion to dismantle the hinges of the doors. This could possibly be to prevent forceful entry. Audi says that despite the large number of additional special equipment, the Audi A8 L Security is almost impossible to distinguish from the serial A8 L. This is to ensure that occupants are not identified as specially protected persons.

Power in the highly secure car comes from twin-turbo V8 engine which develops 563 hp of peak power and max torque of 800 Nm. The top speed has been lowered from 250 kmph to 210 kmph. Transmission duties are handled by an eight-speed tiptronic unit. The car claims to go from zero to 100kmph in 6.3 seconds which is blazing fast considering the body weight in motion. The car can drive up to 80 kilometers at 80kmph even on completely deflated tyres.

It reportedly takes four hours for the A8 L Security to get all its protective features and it will cost around $750,000 in Russia.