The latest Volkswagen Tiguan wants to be a comfortable drive in the premium SUV space, complete with an updated feature list and a new petrol engine under the hood.
By : Shubhodeep Chakravarty
| Updated on: 08 Dec 2021, 04:45 PM 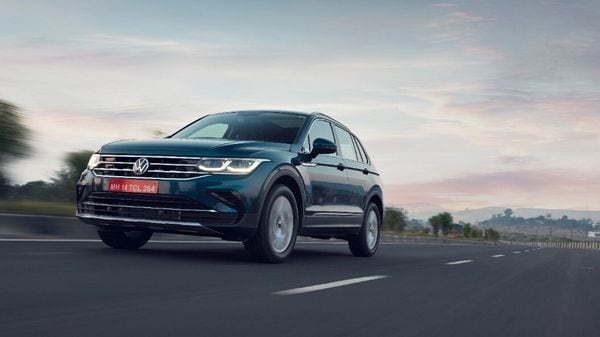 The 2021 Volkswagen Tiguan aims to play to its core strengths while also offering more premium features to its buyers.

The 2021 Volkswagen Tiguan recently launched in the Indian car market at an introductory price of ₹32 lakh (ex showroom). The latest Tiguan forms yet another crucial part of Volkswagen to bet big on SUVs before the unveil of a much-touted sedan in early Q2 of 2022. Globally, the Tiguan does decent business and sells in good numbers but here in India, it has always been a rathe niche product in the premium SUV space. The second-generation Tiguan, while still likely to cater to a niche segment, packs in a lot in its solitary variant that could potentially interest Volkswagen loyalists and then many more.

The Tiguan SUV has always had a very sophisticated air around it, whether in terms of its exterior design or cabin layout. A capable vehicle on a wide variety of terrains, the latest Tiguan will be assembled locally at the company plant in Aurangabad. And because there is only one fully-loaded variant, it is likely to continue targeting a select group of buyers.

Unlike Taigun, its much younger sibling, large volumes may not - obviously - be the name of the game for Tiguan. But Volkswagen has ensured that the latest model comes fully equipped to woo and wow. The new Tiguan from Volkswagen is built on the MQB platform.

What are the changes on the exterior body, the updates in the cabin and what's happening under the hood? Here's a first-impression review of the 2021 Volkswagen Tiguan.

Volkswagen Tiguan exterior design
The Tiguan isn't the most stylish, svelte or sporty SUV around and yet, when it comes to elegance, it is more likely that this vehicle will take the crown. Mindful updates to its exterior design language seek to accentuate its classy appeal and Volkswagen has done fairly well to blend new elements on a smart face. 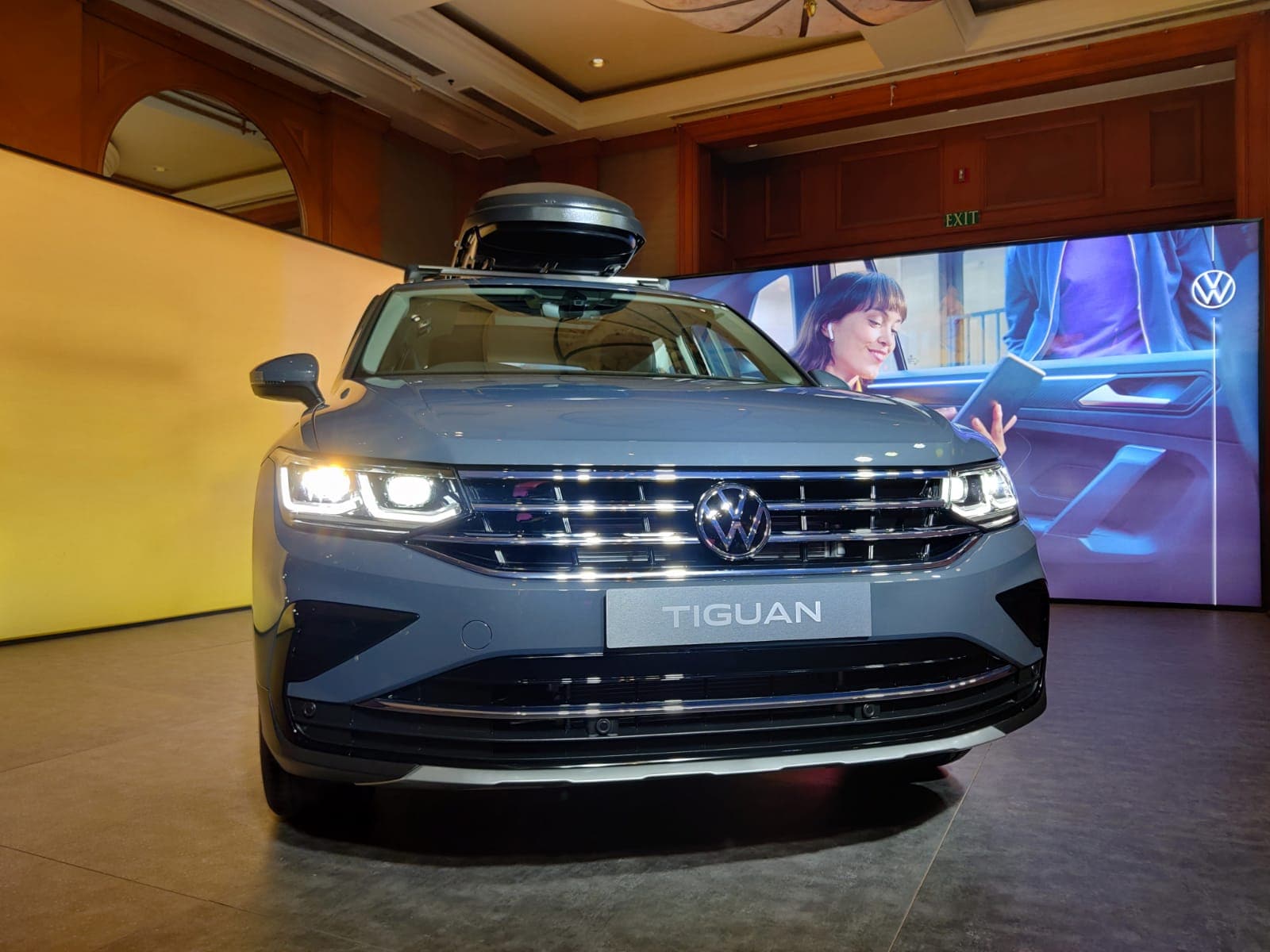 A wider grille and sharper LED head light units adorn the face of the new Tiguan from Volkswagen.

The grille, for instance, is wider than before but remains typically VW, complete with the round logo of the company in the middle. The front bumper has been reworked and now comes with black-finish inserts. The bonnet remains flat but with two crease lines on either side. And then there are the new LED Matrix head light units complete with adaptive IQ technology which, Volkswagen claims, provides enhanced illumination across varying weather and terrain conditions. The light system is made up of 24 individual LEDs that, powered by an advanced front lighting system, assures better visibility.

Turn over to the rear and the LED combination tail lamps also get new light signatures. The tail light cluster has a switch function for the LEDs when braking which could potentially better warn drivers behind. 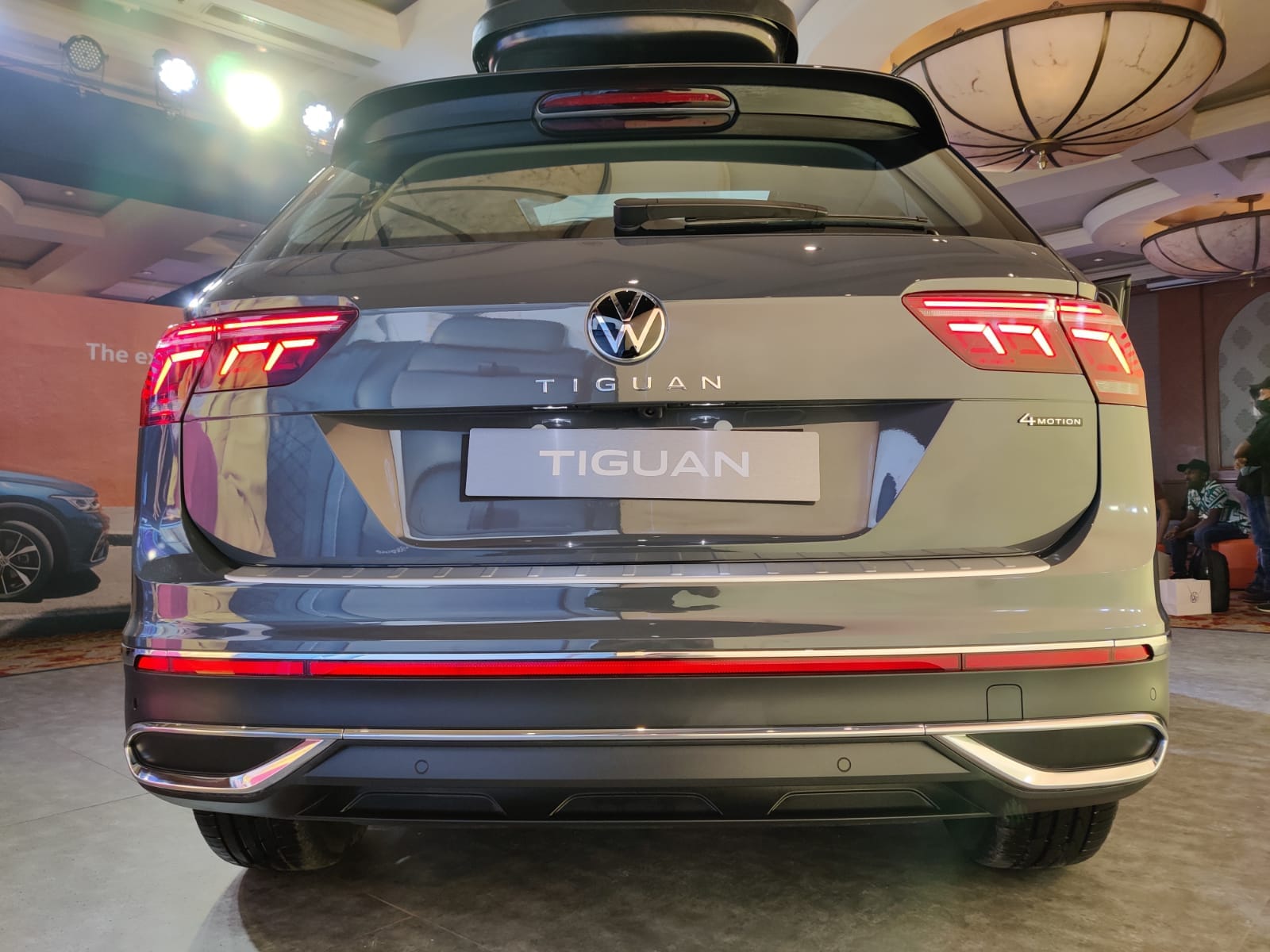 The boot of the new Tiguan can also be opened via gesture.

With a decent ground clearance, large and circular wheel arches, conventionally-styled 18-inch alloy wheels, chrome line around the window lines and across the lower end of the side door, the Tiguan continues to ditch the big and boisterous visual language for eloquence.

Volkswagen Tiguan cabin
The 2021 Tiguan is now loaded with a host of new features and there is much in the cabin to take in, to appreciate. A panoramic sunroof, multi-function display, digital cockpit, seats in Vienna leather - much of what the cabin offers is classy and premium - perhaps deserving of the price tag. There is also generous amount of back-seat space which would make this an ideal vehicle for long journeys, complete with 615 litres of boot space. 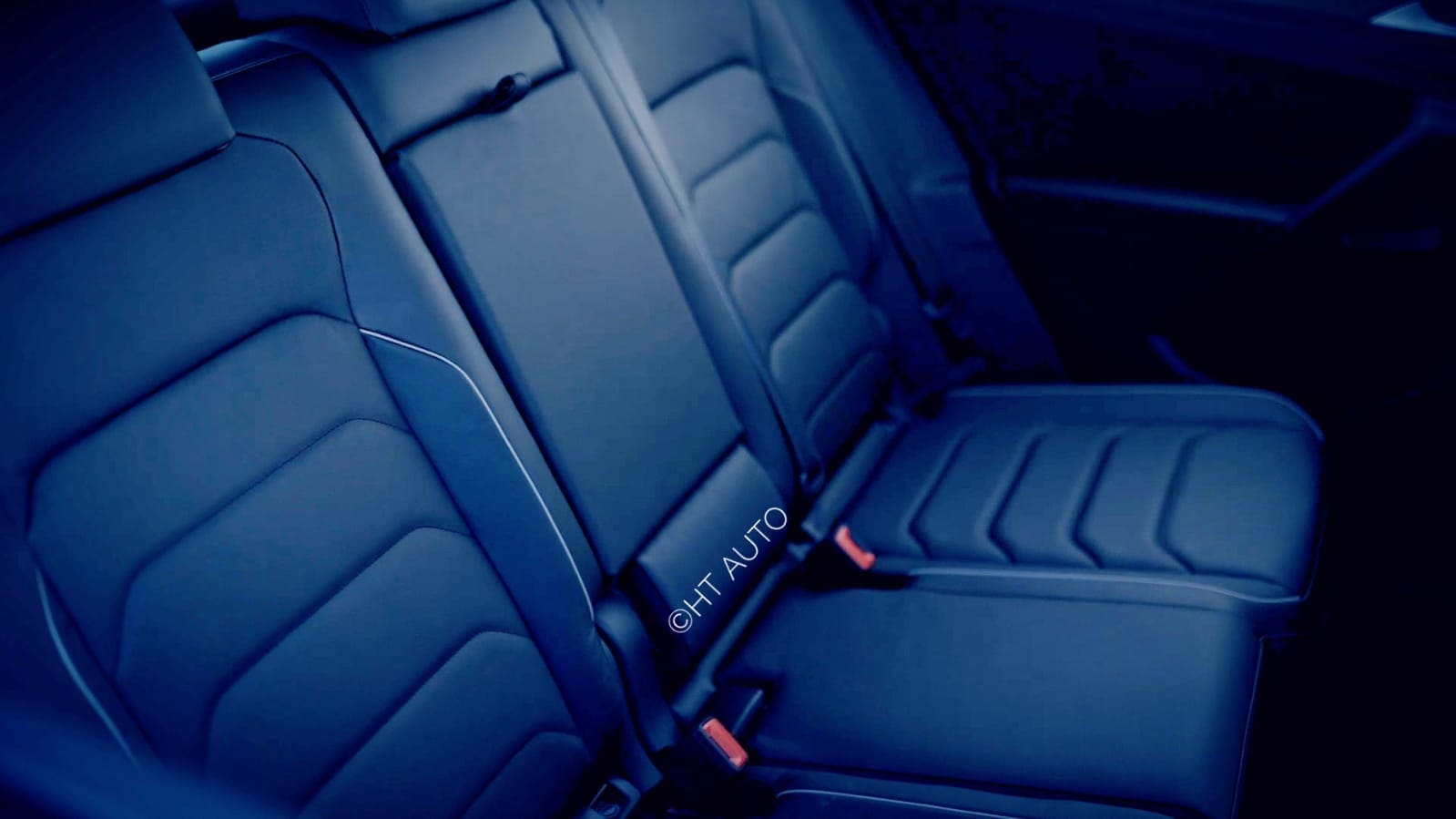 While most buyers may opt to drive the new Tiguan, there is much comfort that the SUV promises to those on the rear seats.

What would have been nicer though is a larger main screen which, while positioned well and capable of being controlled via gestures, is a tad small at eight inches. And while the driver-side seat can be electronically adjusted, the front passenger seat continues to rely on push and pull of the lever. There is no seat ventilation and the speakers from a premium audio brand would have perhaps earned the car more bragging rights.

Nonetheless, the quality of fit and finish is top notch and lo and behold, 30-shade ambient light system and a Volkswagen Connect app for live tracking, geo-fencing and to monitor driver behaviour too.

Volkswagen Tiguan safety highlights
It was obvious that being a premium Volkswagen offering, the Tiguan would continue to offer a mile-long list of safety features. And the 2021 Tiguan promises to continue keeping the driver and occupants cocooned well.

Volkswagen Tiguan engine, transmission and other specs
The biggest highlight of the latest Tiguan is what's under the hood. Out goes the diesel engine and in comes a 2.0L TSI engine which is paired with a seven-speed DSG transmission with 4MOTION technology. 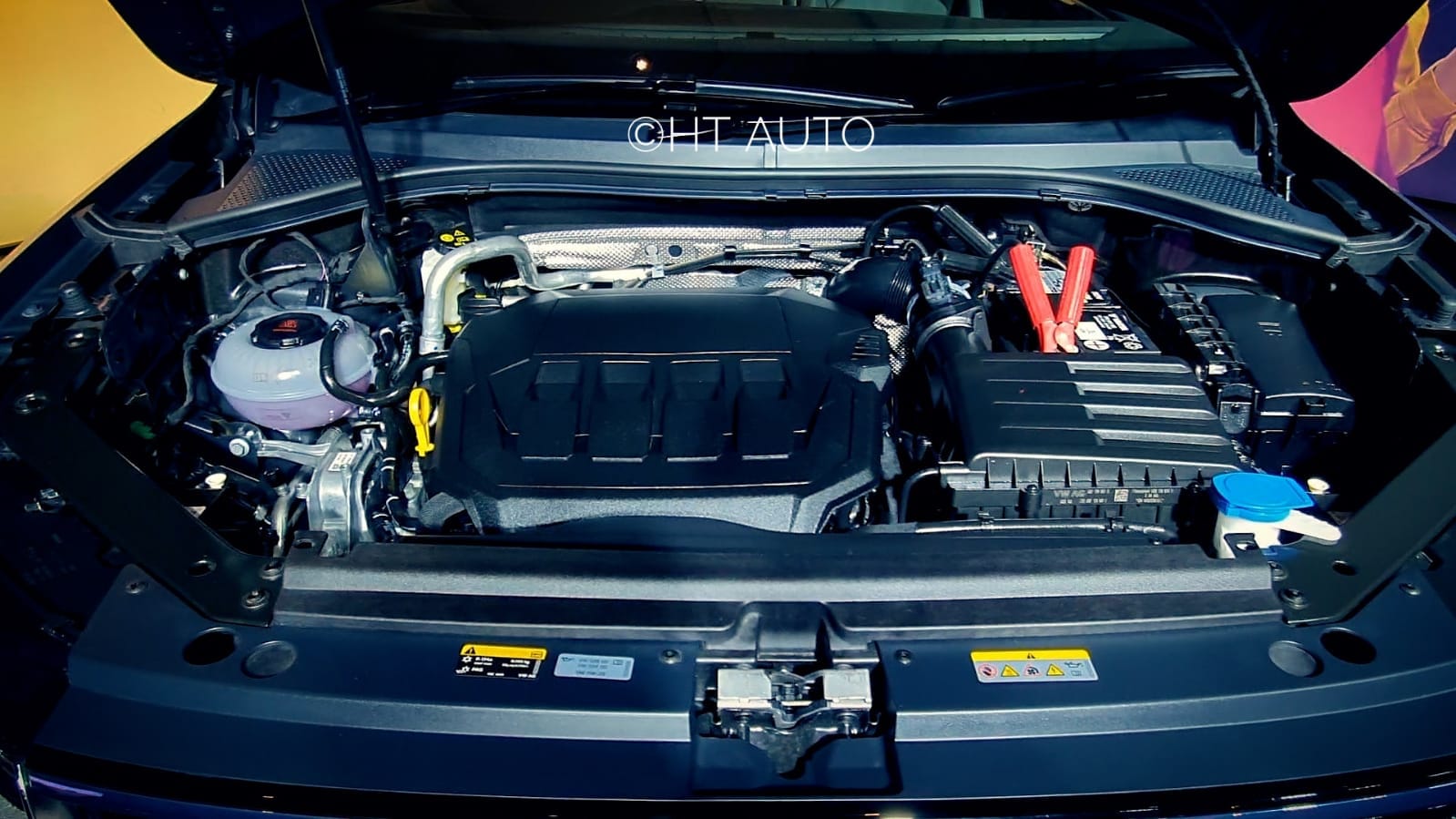 The new TSI engine under the hood of the Tiguan claims to give the vehicle some serious capabilities across terrains.

The new Tiguan puts out 190 Ps and offers 320 Nm of max torque. Volkswagen is making big promises of a superior pick-up and fast acceleration but we will have to wait for the on-road test to comment further on that.

And for those who may have an eye out on mileage, the ARAI-certified fuel economy figure stands at 12.65 kmpl.

Initial impressions
The Volkswagen Tiguan isn't for the masses. It never was. Instead, the 2021 Tiguan continues to underline its exclusive appeal through its elegant updates. While many may pit it up against the top variants of Hyundai Tucson and the Citroen C5 Aircross but Volkswagen, by its own admission, says it is gunning for cars in the lower end of the luxury segment. On that count, the 2021 Tiguan does appear like a very compelling package.