Majority of the changes on the new Innova Crysta will be concentrated in terms of its exteriors.The new Toyota Innova will be updated with a slightly larger front main grille featuring a thick chrome surround.
By : Prashant Singh
| Updated on: 10 Nov 2020, 08:01 PM 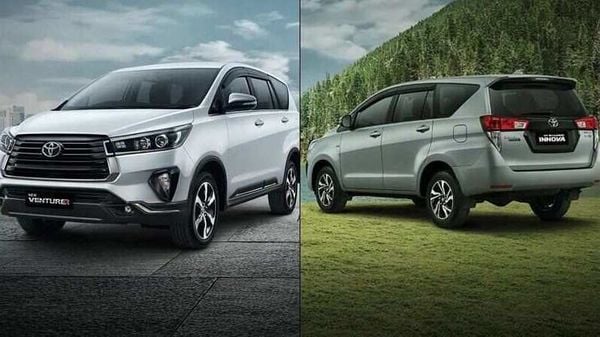 Toyota is gearing up for the launch of the facelifted Innova Crysta MPV which broke cover in Indonesia in October. The new Innova will be launched in the Indian market this month, dealer sources say. Pre-bookings for the car have also commenced at dealership level at a token amount of ₹1 lakh.

Majority of the changes will be concentrated only in terms of cosmetics. The exterior updates will be more or less the same as seen on the international-spec model.

On the outside, the MPV will be updated with a slightly larger front main grille with a thick chrome surround. The number of slats have gone up in comparison to the existing model. The new model will use tweaked headlamps with chrome extensions merging neatly into the grille. The higher-spec iteration of the SUV will also come kitted with new LED daytime running lamps. In addition to all these changes, the MPV will also feature new and sharper looks with a blacked-out chin and a silver faux skid plate.

Over the sides, new diamond-cut 16-inch alloy wheels will also be part of the package. Over the back, the car will be updated with a black hexagonal panel residing between the tail-lights. There may also be a new rear bumper on the update model.

As far as interiors go, the upcoming Innova Crysta will be given a new instrument cluster in majority of the trims. It will also get a new 9.0-inch touchscreen infotainment system supporting Android Auto and Apple CarPlay connectivity, as well as an in-built air purifier. The car will also be updated with a 360-degree camera.

In terms of mechanicals, the MPV will most likely carry forward the existing line-up which includes a 150hp, 2.4-litre diesel and 166hp, 2.7-litre petrol engine options.