The facelifted Toyota Innova Crysta will be sold in both Kijang Innova and sporty Venturer iterations in Indonesia.It is expected to hit the Indian shores next year.
By : HT Auto Desk
| Updated on: 17 Oct 2020, 19:03 PM 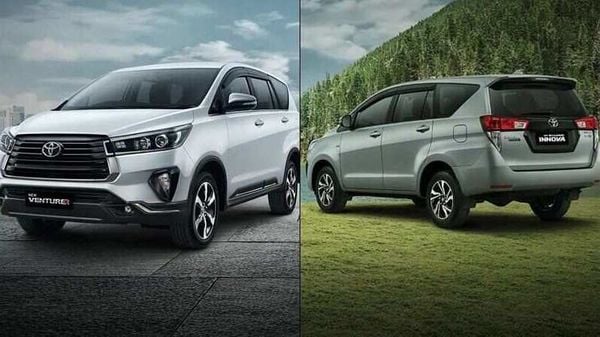 Toyota has recently revealed the facelifted Innova Crysta for the Indonesian market. This is the first major update for the MPV since its debut in 2016. The new Innova Crysta gets a slightly updated exterior design, tweaked interiors, as well as a more feature loaded cabin in comparison to the model it replaces.

The Indonesian-spec model comes in two variants - Innova and Venturer. For the record, the same is sold as the Innova Crysta and Innova Crysta Touring Sport in the Indian market. The updated model was also spotted a few days back.

The facelifted model will be sold in both Kijang Innova and sporty Venturer iterations in Indonesia. The key differences between both the models include a trapezoidal chrome grille on the regular Kijang Innova as opposed to a piano black grille on the sportier Venturer iteration. Also, while the regular model gets two-toned 16-inch alloys, the Venturer rolls on bigger 17-inch alloy wheels.

Under the hood, the new Innova Crysta gets a choice of petrol and diesel engines as before. There is a 2.0-litre dual VVT-i engine delivering 137 PS of power and 183.3 Nm of peak torque. The oil-burner option include a 2.4-litre VNT unit capable of making 148 PS. It is available with two transmission options - 5-speed manual and a 6-speed automatic.

The updated model is expected to hit the Indian shores next year.