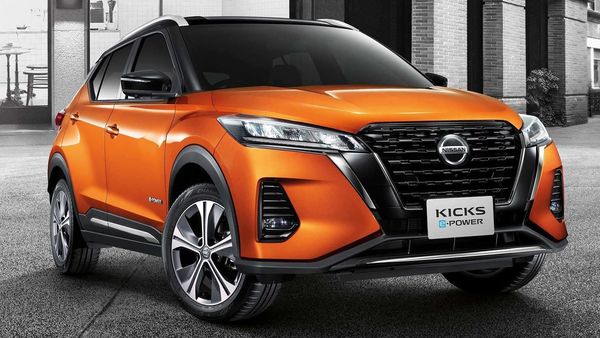 The facelited Nissan Kicks e-Power has been officially revealed ahead of its Thailand launch. What's to be noted is that this model is the facelifted version of the Kicks BS 6 which is set to arrive in the Indian market soon. The Indian-spec model will continue with the older design and won't sport any cosmetic updates at all.

As the studio image suggests, the new Kicks features a completely refreshed front fascia with sleeker headlamps, bigger radiator grille and sportier bumper. The updated V-motion grille forms X-shape with the lower grille. The latter also features a dash of chrome treatment. The fog-lamp housing is also featured in a new all-black housing. Overall, the design is cleaner and more up-class. The rear section remains more or the less same, but it now gets new body-coloured rear bumper.

On the inside, as revealed in the previous report, it gets new lever for automatic transmission, new start/stop button, and electric parking brake. On the other hand, the previously available semi-digital panel, steering wheel, and dashboard design has been carried over.

With the update, Nissan Kicks will gain company's e-Power technology. A badge with the same name can also be found stamped on to the tail-gate of the SUV.

It sources power from the 1.2-litre HR12DE three-cylinder petrol sipping engine which works with a 1.5kWh battery pack. Overall, the output of the system stands at 129 PS. For the uninitiated, the Nissan's e-Power technology imitates functioning of EVs since the engine acts a generator which produces electricity for the electric motor(s) which then drive the wheels.

On the other hand, the Indian-spec Kicks BS 6 will use a 1.3-litre turbocharged petrol and 1.5-litre naturally aspirated petrol engines. It's booking have started in India.