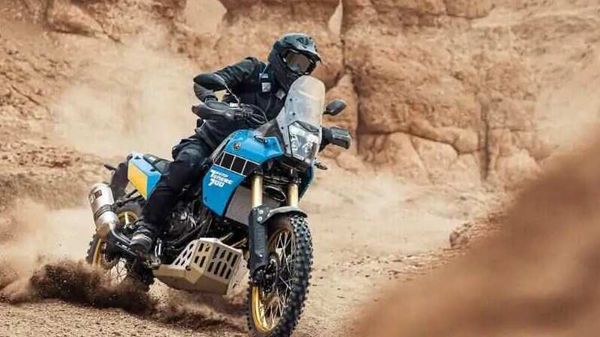 On the outside, the bike gets the 1980s rally-inspired paint-job, apart from that, it has also been given performance parts such as upgraded skid-plate, rally seat, Akrapovic end can, and guards for chain and radiator.

Its special blue and yellow livery is a tribute to the rally bikes ridden by Jean-Claude Olivier and Serge Bacou in the Dakar Rally (1983 -1984). Jean-Claude Olivier, also known as JCO, played a significant role in making the first production model XT600Z Tenere one of Yamaha's most successful adventure bikes.

There is no update in the engine department as the bike gets the same 689 cc, parallel-twin engine which delivers 72.4 PS of power at 9,000 rpm and 68 Nm of peak torque at 6,500 rpm. The engine is available with a 6-speed transmission.

The bike tips the scale at over 200 kg and is claimed to be a very promising adventure touring motorcycle. It gets ABS which is part of the standard kit. It can be switched off or on, depending up on the riding need. Save for this, there are no other electronics or rider aids. So in case you are wondering, the bike doesn't get the usual traction control, riding modes, and other such electronics.

It features a new 4 mm thick aluminium bash plate which protects the engine underbelly and lower frame parts. Also, there is a new black aluminium radiator guard, and an aluminium laser-cut chain protector which saves the bike parts on rough and challenging terrain.

Its new one-piece seat has raised the seat height by 20 mm in comparison to the stock bike, it now has an overall seat height of 895 mm which may be challenging for most of the riders. It rolls on the same 21-inch front and 18-inch wire spoked wheels as seen on the stock bike.

The bike will reach the European dealerships by July. As far as Indian market is concerned, there are no confirmed plans for it to arrive here anytime soon.