Vespa 75th edition to be launched in India on August 19

Vespa has previously announced the 75th Anniversary models on the occasion of completing 75 years of operations.Vespa has managed to produce 19 million scooters in the last 75 years.
By : HT Auto Desk
| Updated on: 14 Aug 2021, 10:10 AM 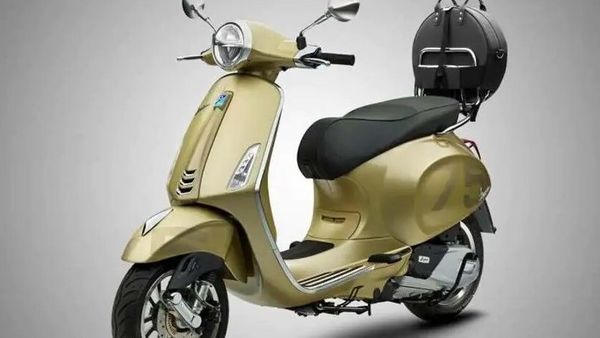 Vespa has previously announced the 75th Anniversary models on the occasion of completing 75 years of operations.

Piaggio will launch the new Vespa 75th model in the Indian market on August 19th. Apart from the launch date information, the company has remained tight-lipped on other details of the upcoming scooter. Apart from the Vespa 75th, the company also offers other exclusive offerings such as Vespa Primavera 150 in the select international markets.

On the outside, expect the Vespa 75th to feature the number “75" on the body panels to commemorate the scooter maker’s 75th anniversary. The model could also sport a large circular leather bag mounted on the tail as found in the Malaysian-spec unit of the Vespa 75th scooter. This bag comes based on velvety-soft nubuck leather featuring the same paint theme as the saddle. The bag also sports a shoulder strap and clips on the luggage rack thanks to a quick-release mechanism.

Expect the scooter to feature a special “Giallo 75th" colour scheme which takes inspiration from the original model’s colour theme. It will also profoundly display a host of chrome-plated details on the badge, the instrument cluster, front mudguard, muffler, and rear-view mirrors.

As far as pricing goes, expect the 75th edition to carry a price premium over the standard version it comes based on.

Vespa has managed to produce 19 million scooters in the last 75 years. And the 19th millionth scooter to roll out of the production lines at Pontedera plant was a GTS 300.