Triumph Trident 660 to launch in India on April 6 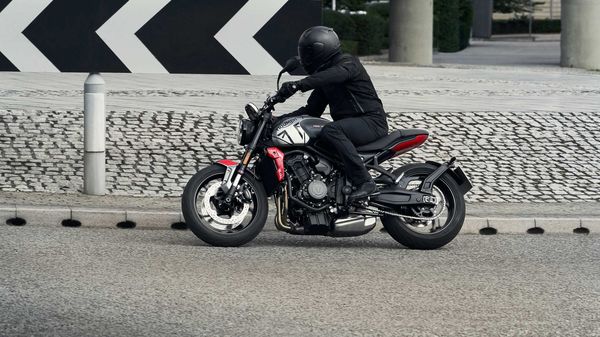 Triumph Trident 660 will be direct rival to the Kawasaki Z650.

After the global announcement of the Triumph Trident 660 last year, the company has announced that it will roll out the middleweight naked roadster Trident 660 in India on April 6. The upcoming Trident 660 will be a direct rival to the likes of the Kawasaki Z650 and the Honda CB650R. Triumph has previously told HT Auto, that the Trident will be placed as one of the most affordable bikes in its portfolio. Expect it to cost somewhere in the range of ₹6 lakh to ₹7 lakh (ex-showroom).

The company opened the official bookings for its upcoming middleweight last year.

Despite being one of the most affordable bikes in Triumph's portfolio, the Trident won't be short on mechanical or feature wizardry. It will draw power from a 660 cc, inline-three cylinder engine which is capable of delivering 79.8 bhp of maximum power and 64 Nm of peak torque. The engine will come mated to a six-speed transmission.

It will come kitted with electronics rider aids and features such as two ride modes- Road and Rain, switchable traction control, and throttle-by-wire. It will also get a TFT screen along with a Bluetooth module for phone, message, and GoPro control which is optional.

On the outside, the Trident 660 will sport a rather simplistic design. It will adorn a round headlamp with full-LED lighting at the front end. There will be a muscular fuel-tank gelling in with a single-piece seat and minimal-looking tail section. It is expected to be introduced in four colour options in India - Matt Jet Black & Matt Silver Ice, Crystal White, Silver Ice & Diablo Red, and Sapphire Black