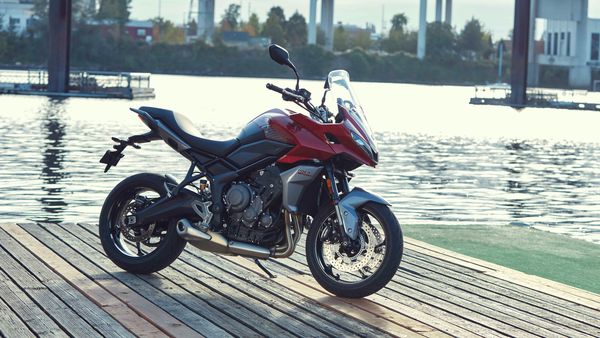 After recently taking the covers off the new Tiger Sport 660 motorcycle, Triumph Motorcycles has now listed its upcoming adventure touring bike on the India website. The company has also updated the ‘coming soon’ tagline on the bike suggesting that it will go on sale in India within the next few months.

The new Tiger 660 will come out to be the replacement for the entry-level Tiger 850 model. It will set sight on other base adventure tourers in the Indian market such as the Kawasaki Versys 650 and the Suzuki V-Strom 650 XT.

As per official details revealed by the company, the new Tiger Sport 660 comes based on the Trident 660 roadster that already sells in the Indian market. However, the new Tiger Sport 660 comes with a whole new design, different sub-frame, and longer travel suspension all of which make it a worthy competitor in the adventure-touring segment. Some of the key exterior highlights on the new model include a semi-fairing along with a tall windscreen at the front, a step-up saddle, integrated pannier mounts, and an underbelly exhaust.

The bike comes with two riding modes – Road and Rain, full-LED lighting, a Bluetooth-ready instrument cluster, a switchable traction control, and ofcourse it also gets ABS as standard. The optional features on the bike include Bluetooth-module and quickshifter.

At the heart of the Tiger Sport 660 sits the Trident-derived 660cc, inline-three cylinder, liquid-cooled engine that makes 80bhp of power at 10,250rpm and 64Nm of peak torque at 6,250rpm. The gearbox remains a 6-speed unit.