Home Auto Two Wheelers Triumph Tiger 1200 To Launch In India On May 24, To Take On Ducati And Bmw Bikes

Triumph Motorcycles had introduced the Tiger 1200 bike to the global markets last year. In India, the two-wheeler manufacturer has already started to take bookings ahead of the launch next week.
By : HT Auto Desk
| Updated on: 19 May 2022, 02:15 PM 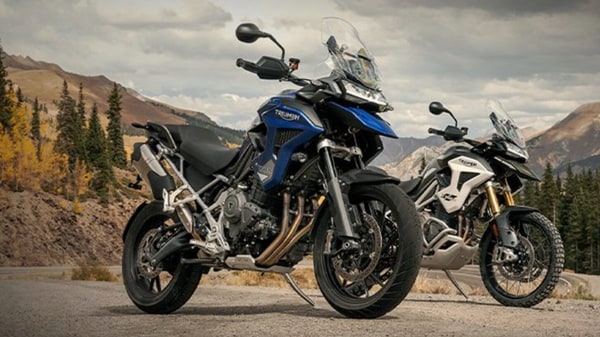 Triumph Motorcycles had introduced the Tiger 1200 bike to the global markets last year.

Triumph Motorcycles is all set to launch the new Tiger 1200 motorcycle in India next week. The two-wheeler manufacturer is already accepting bookings, while the official price announcement along with key specifications will be revealed on May 24. Tiger 1200 is one of Triumph Motorcycles' popular adventure tourer bike. The manufacturer had introduced the Tiger 1200 bike to the global markets last year in December.

The new Tiger 1200 will offer certain changes compared to the preceding models. In its new generation, the adventure tourer bike now comes with new design, new powertrain, hi-tech features and more. Triumph Motorcycles has officially said that the new Tiger 1200 will be offered in India in four variants, which include the GT Pro, GT Explorer, Rally Pro and Rally Explorer.

The new Tiger 1200 will be powered by a new 1160cc engine. This engine has been tuned to deliver 150PS of maximum power at 9,000rpm, which is 9PS more than the last generation model. At this output, it comes out as the most powerful shaft drive motorcycle in the class. The overall torque output has also gone up to 130Nm at 7,000rpm, which is 8 Nm more than the last generation model.

Among other key changes to be seen on the new Tiger 1200 is an electronically controlled semi-active suspension. It will also come with Brembo Stilma brake callipers .