Home Auto Two Wheelers The New Cb F Concept Is The Honda Of Your Dreams, Details Inside

The new CB-F concept is the Honda of your dreams, details inside

The Honda CB-F concept takes inspiration from the Japanese-spec CB900F motorcycle.It gets the same 998cc, inline-four-cylinder, liquid-cooled, DOHC engine as the CB100R.
By : Prashant Singh
| Updated on: 27 Mar 2020, 02:41 PM 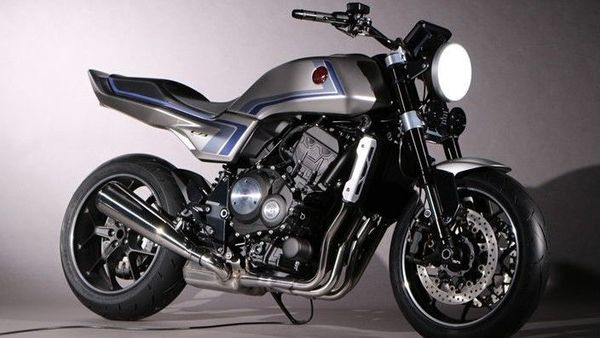 The 998 cc Honda CB-F concept has made its official debut. This retro-styled sport-naked concept may be a glimpse inside future design of the CB1000R.

Honda officially shared, “the CB-F concept is the result of revisiting the CB series’ history, which reached its sixth decade last year, and thoroughly exploring what to preserve, and what to evolve with the company’s flagship sports bike."

In terms of mechanicals, the bike is essentially a Honda CB1000R . It utilizes a 998cc, inline-four-cylinder, liquid-cooled, DOHC engine which churns out 143 PS of maximum power and 104 Nm of peak torque. The transmission is a 6-speed manual unit.

In terms of cycleparts, it is expected to sport the similar suspension set-up as the CB1000R which uses a Showa SFF-BP USD fork at the front, and a rear Showa monoshock unit which comes paired to a single-sided swingarm.

Weather or not the CB-F would be introduced in the production line-up isn't known at the moment. Also, there are less chances that it would actually enter production anytime soon since it would be a closely matched product to the current ‘neo-retro’ CB1000R.

In other updates, Honda Motorcycle and Scooter India (HMSI) has planned to locally produce some of its imported premium bikes from the next fiscal. This mover will make such products more affordable and thereby garner volumes. (Read more details on it here).