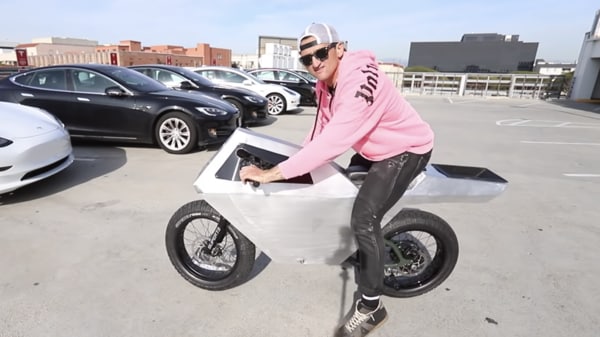 A screengrab from Casey Neistat's video on CyberBike

The Tesla CyberTruck design inspired popular Youtube personality Casey Neistat to remodel a motorcycle that can be dubbed as CyberBike. In his latest video, Neistat was seen riding his CyberBike with the now iconic metal body design.

While the CyberBike looks like the Tesla CyberTruck, there is a big difference between the two. The Cybertruck is made of ultra hard cold-rolled stainless steel. Casey Neistat used only aluminium to build his CyberBike.

Neistat, who has declared himself as a Tesla fan, also took a dig at Elon Musk’s botched-up glass test during the unveiling of the CyberTruck. He recreated the scene where Elon Musk there a stone trying to prove the glass on CyberTruck was shatterproof and failed. Neistat’s CyberBike did not have any glass element. However, he sound effect of glass shattering when he threw something at the CyberBike and he followed up with the message: ‘ok, so it’s not a real Tesla CyberBike but we tried our best’.

The California-based electric bike maker recently unveiled its next generation full suspension e-bike called the R-Series. It is powered by a 960Wh battery that can push the bike to around 64 kms in single charge.

He goes on to show how the CyberBike was designed by a team at Super73 with the help of cardboards. Neistat explains that is not safe or easy to ride the CyberBike around because the aluminium shell actually makes it difficult to steer it at corners.

But all that did not matter to the large number of onlookers who Neistat riding the CyberBike around. For some ‘it looks dope!’