Suzuki has begun dispatching the new Hayabusa to the dealerships in India. The first batch of the 2021 Suzuki Hayabusa had 101 units all of which found buyers within days of launch.
By : HT Auto Desk
| Written By : Prashant Singh
| Updated on: 28 May 2021, 15:24 PM 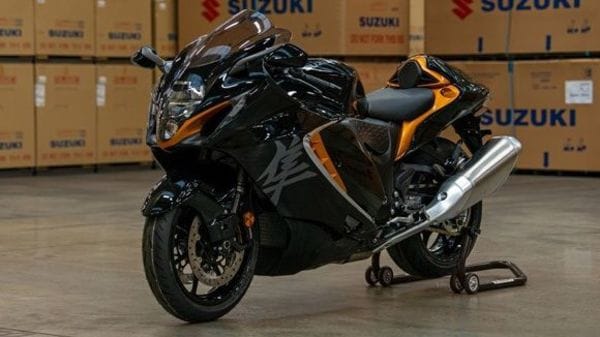 With the latest update, the Hayabusa has transformed into a completely new bike altogether.

Suzuki announced the launch of the much-awaited Hayabusa sports bike earlier this year in India. Now the company has begun dispatching the shipments to the dealerships and alongside customer deliveries of the legendary sports touring motorcycle have also started.

The new-gen Hayabusa commands a price tag of ₹16.40 lakh (ex-showroom, India) which makes it ₹2.65 lakh costlier than its predecessor.

With the latest update, the Hayabusa has transformed into a completely new bike altogether. This is the third-generation bike which comes after a long wait as previously it was updated back in 2008 when the second-gen model took the torch from the original Hayabusa (1999).

(Also Read: Suzuki claims to have sold its highest ever motorcycles in India in April 2021)

With the latest generation change, Hayabusa has gained a completely new exterior design along with a range of electronics updates making it the most technologically advanced Busa to date. It now gets a six-axis IMU, traction control, anti-lift control, a ride-by-wire throttle, launch control, and much more. At the heart of the new Busa sits a 1,340cc, inline four-cylinder engine that has also been updated to meet the stricter Euro 5/BS 6-emission norms.

Hayabusa is a known name in the Indian sports bike industry. Suzuki Motorcycle India also introduced a special CBU assembly line in its Manesar plant to make the motorcycle more affordable and in turn garner more sales. In fact, the newly launched model was also sold out in just a week of its launch. The first batch of the Busa had 101 units all of which found buyers within days of launch and the white shade was the first one to go out of stock. An announcement regarding the second batch of the bike is expected to be made sometime in July or August.