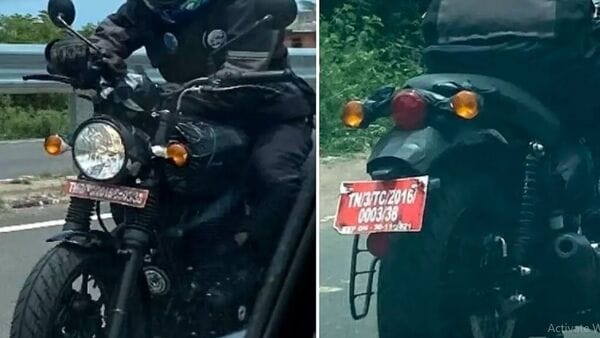 Expect the Hunter 350 to make the public debut later this year around the festive season.

Royal Enfield's upcoming Hunter 350 has been again spotted ahead of the official launch that is said to happen later in 2022. The motorcycle's new spy images focus on the bike's tail light assembly that includes a small circular tail lamp. The indicators as visible are LED units.

The Hunter 350 seems to be visibly different than the existing Meteor 350 and the use of road tyres indicates that the bike will be aimed primarily fo highway cruising.

While the front of the motorcycle will feature a traditional telescopic fork with fork gaiters, the rear will use twin spring shock absorbers. The engine is most likely to remain the same 349cc, single-cylinder engine that is also found on the Meteor 350, producing 20.2bhp and 27Nm mated to a five-speed gearbox.

Other key details to be picked from the fresh images include the use of a single disc at both ends. The upcoming Hunter 350 could also get dual-channel ABS. It will also get a pillion backrest to provide more support to the rear seat occupant.

While there is no official confirmation as to when the bike will be launched in the Indian market, expect it to make the public debut later this year around the festive season.

Meanwhile, the company is gearing up for the official introduction of the Scram 411 on March 15th. It will come to be a derivation of the popular Himalayan ADV and is also likely to be priced lower somewhere in the bracket of ₹1.80 lakh to ₹1.90 lakh (ex-showroom, Delhi).