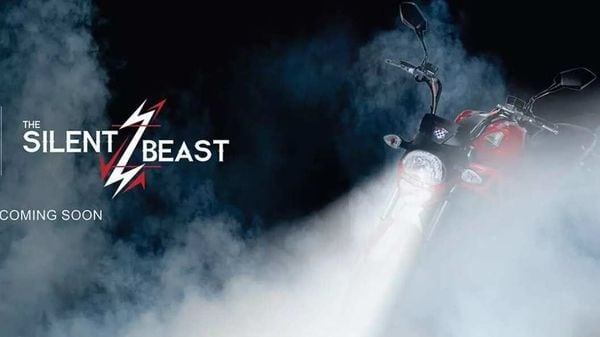 Okinawa is gearing up for the launch of the new Oki100 electric motorcycle which is slated to go on sale in April 2021. The company has now dropped a teaser of the upcoming electric bike ahead of its launch.

The Oki100 was initially previewed in its concept form at the Auto Expo 2018 and was slated to go on sale in 2020, but the pandemic threw a wrench in its launch plans.

The teaser image shows a very familiar silhouette of a Ducati Monter naked roadster inspired EV. If the final bike is based on the previously showcased Oki100 concept, it is going to have a Monster-like appearance with oval-shaped headlamp, rounded and sculpted fuel tank and exposed red-coloured frame. Goes without saying, the overall size and dimensions of the bike will be nowhere near the original Monster and it will also roll on a mini 12 and 10-inch wheel combination.

It is going to come equipped with upside-down front forks and a monoshock unit at the rear. In terms of technical specifications, the bike will feature a detachable lithium-ion battery the capacity of which isn't known at the moment.

While official performance figures aren't revealed yet, the bike is said to have a full charge range of around 150 km and a top speed of 100 kmph. Goes without saying, they may only be paper figures which may not hold up in terms of real-world delivery.

When launched, expect the Okinawa Oki100 electric motorcycle to be priced somewhere around ₹1.10 lakh (on-road). It will be a direct rival to the likes of the Revolt RV400.