The new Suzuki Hayabusa will reach the global markets soon after its official debut.The 2021 Hayabusa will employ a new instrument cluster which will also likely display a greater set of informatics.
By : HT Auto Desk
| Updated on: 02 Feb 2021, 03:01 PM 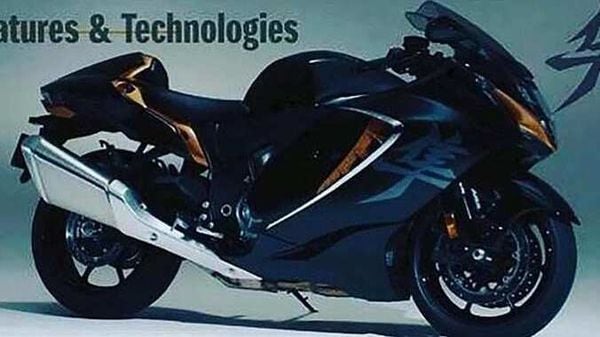 The new Busa is expected to land on the Indian shores by late-2021. Image Courtesy: Instagram/ hayabusa__taiwan •

Suzuki is gearing up to reveal the new 2021 Hayabusa on the global platform on February 5th. The arrival of the new motorcycle was officially teased in a short video teaser (below) which also showed a glimpse of the updated instrument console.

Now a new image surfacing on the internet claims to have leaked the motorcycle before its official debut. If details from the image are to be believed, the new Hayabusa will feature a very familiar silhouette as found on the previous model. While retaining its overall size and girth, the Hayabusa will grow sharper featuring modern design elements. The previously found curvaceous design traits on the Hayabusa will now be chucked in favor of sharper-looking bits. The dual-exhaust arrangement will be carried on the new bike, albeit with a new chromed up design.

As revealed before, it will employ a new instrument cluster which will also likely display a greater set of informatics. Also, expect the electronic package to be updated significantly with several electronic rider aids such as a bi-directional quickshifter, traction control, wheelie control, cornering ABS, and 6-axis IMU.

The new Hayabusa will reach the global markets soon after its official debut. Suzuki Motorcycle India is also expected to introduce the new Busa in the country after its introduction in the foreign markets. While a timeframe is not known at the moment, it is expected to land on the Indian shores by late-2021.