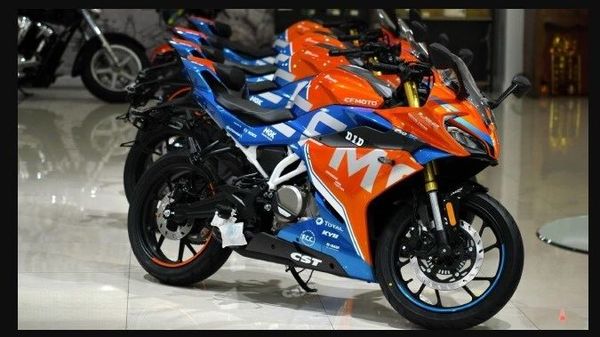 The new Race edition of CFMoto 250SR may not be launched in the Indian market anytime soon.

The new CFMoto 250SR Race edition motorcycle has broken cover in China. The new special edition motorcycle has been seen in a striking new paint scheme delineating its sporty character. The fully-faired motorcycle can be seen adorning a nicely matched combination of orange and blue colours. This is in fact very distinctive from the previous blue-coloured Race edition. It comes out as a direct rival to the KTM RC 200 sportsbike.

Needless to say, the new paint theme makes the bike look rather aggressive, highlighting its sculpted design. The motorcycle gets a twin-beam LED front headlamp with LED DRLs flanking the headlights. There are fat golden-colour front USDs that contribute to its sporty appeal. Over the sides, the cuts and curves of the side fairing cover out the internals, while adding to its sporty appeal. Also, the split seat setup and high-raised tail section makes the motorcycle look fairly aggressive.

It sports a colour TFT screen with Bluetooth connectivity. Other feature highlights of the model include a liquid-cooled engine, tubular steel frame, disc brakes, and KYB-sourced suspension units.

At the heart of the motorcycle sits a 249.2cc, single-cylinder, liquid-cooled engine that is known to produce 27.5bhp of maximum power at 9,750rpm and 22Nm of peak torque at 7,500rpm. The engine comes paired to a 6-speed gearbox.

The anchoring duties on the RC200 rival are performed by a 292 mm single disc at the front and a 220mm single rear disc.

Chances are less likely that the CFMoto 250SR will be launched in the Indian market anytime soon. Instead, the bigger 300SR may launch in the country by end-2021, or before.