Apart from the new 650NK, CF Moto has also announced the launch of the new 650MT and 650GT bikes in India.CFMoto has also already commenced bookings and test rides of the new bikes at its authorised dealerships.
By : HT Auto Desk
| Updated on: 02 Jul 2021, 09:44 AM 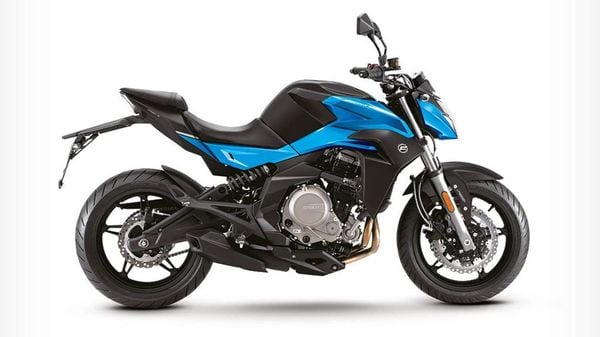 Apart from the powertrain update, there is no other change on the new CF 650NK.

CFMoto has announced the launch of its new 650 cc motorcycles in India including the new 650NK naked streetfighter motorcycle. The bike has been priced at ₹4.29 lakh (ex-showroom). With the latest BS 6 update, the motorcycle has become costlier by ₹30,000, against the previously available BS 4-spec model.

The company has also already commenced bookings and test rides of the new model at its authorised dealerships. Interested customers can get their units booked at the company website for a token amount of ₹5,000. The company currently operates only five dealerships in India.

Apart from the powertrain update, there is no other change on the motorcycle as it retains its exterior design, styling. And also the equipment, features kit remains the same.

The hardware kit on the motorcycle has been retained for the new BS 6 model and it thus continues to feature the same suspension kit including telescopic front forks and rear mono-shock. For braking, it carries forward its twin rotors at the front, a single disc at the back, and dual-channel ABS.

Apart from the new CF 650NK, the company has also announced the launch of the new 650 MT and 650 GT bikes in India. Both of these machines have also been updated with new BS 6-compliant powertrains.