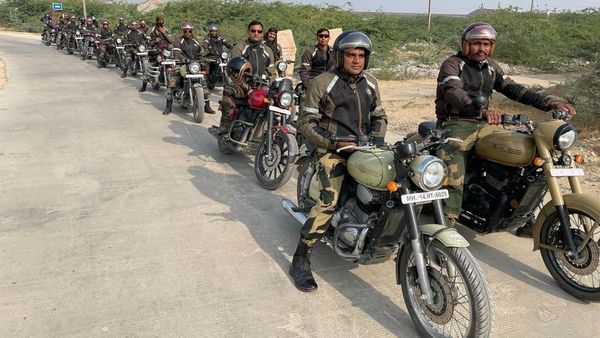 Indian Army has concluded its Swarnim Vijay Varsh with a special bike rally on Jawa Motorcycles to Longewala. The rally was organised to commemorate 50 years of the 1971 war victory against Pakistan. The rally started from Koteshwar, the western-most point of Gujarat and proceeded to Longewala covering a total of 1,495 km over eight days from 29th November to 05th December 2021.

The Indian Army personnel who took part in the rally used the Jawa motorcycles.

Speaking about the motorcycle manufacturer's association with the Indian Army, Ashish Singh Joshi, CEO - Classic Legends, said, it is a great honour for the company to be a part of the yearlong celebrations of Swarnim Vijay Varsh. "We as a company have always stood in admiration of our armed forces and the various rides throughout the year have given a chance to celebrate their bravery and sacrifice even more. Being entrusted by the Indian Army for their expeditions around the country is a matter of great pride for us," he further added.

Jawa Motorcycles in a release also said that it introduced two new colours for its motorcycles. These colours are Khakhi & Midnight Grey, and they were introduced to commemorate the 50th anniversary of the 1971 war victory.

Classic Legends, the parent company of Jawa Motorcycles has also announced that it raised a sum of ₹1.49 crore by auctioning 13 motorcycles from its first batch of production models. The amount raised in the auction was contributed to Armed Forces Flag Day Fund.