The upcoming entry-level adventure motorcycle from Triumph will be called Tiger Sport 660.The new Tiger Sport 660 will also be launched in India.
By : HT Auto Desk
| Updated on: 07 Sep 2021, 09:01 PM 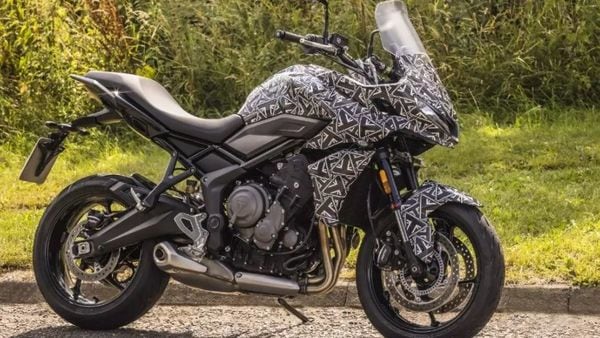 The new Tiger Sport 660 will also be launched in India.

Triumph Motorcycles on Tuesday rolled out the new images of the upcoming Tiger Sport 660 motorcycle in a pre-production form. The UK-based premium motorcycle maker has confirmed that the adventure motorcycle ‘will be launching globally in the coming months’.

Unlike the existing Triumph Tiger series motorcycles, the upcoming Tiger Sport 660 will be a road-biased product. It will feature a semi-faired design for the exterior along with a tall windscreen to prevent wind buffeting on highway speeds.

At the heart of the motorcycle will sit a Trident 660-based engine. This will be a 660cc, inline-three, liquid-cooled engine. This unit delivers 80bhp of power at 10,250rpm and 64Nm of torque at 6,250rpm on the Trident, but needless to say, the output is likely to be different to match Tiger's dual-sport character. The transmission is likely to remain the same 6-speed unit.

It will sport an under-belly exhaust, 17-inch alloy wheels, and a single-piece saddle. Other hardware bits will include upside-down front forks, a rear mono-shock, dual discs at the front and a single disc at the back.

The bike is also likely to arrive in the Indian market but the launch timeline is yet not confirmed. When launched, it will rival the likes of the Kawasaki Versys 650 and the Suzuki V-Strom 650 XT. In India, it is likely to be placed somewhere in the range of ₹8-9 lakh (ex-showroom).

Meanwhile, the company is gearing up for the launch of the new Speed Twin in India on August 31st