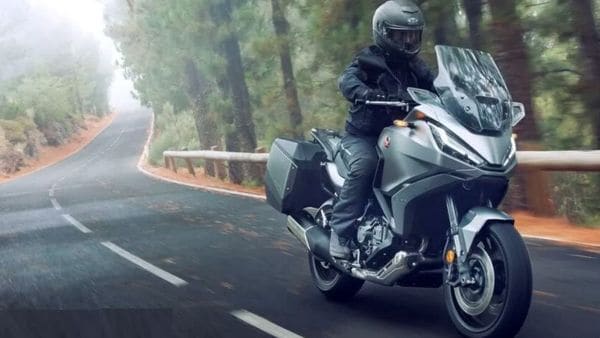 The new NT1100 by Honda will be made available in both DCT as well as manual versions.

Honda has revealed the new 2022 NT1100 for the global markets. The new motorcycle bridges the gap between the 750 touring range and the flagship Honda Gold Wing.

It features the time-tested Honda CRF1100L Africa Twin as its base and comes out as a refreshing addition to the touring category that is currently ruled by adventure bikes.

While the new NT1100 isn't exactly a move towards the VRF days, it deviates a step from the full blow adventure category to road-biased tourers that is likely to be welcomed by riders globally.

The new NT1100 by Honda will be made available in both DCT as well as manual versions. While the manual will cost £11,999, the DCT will be priced at £12,999 in the UK market. Three colour options available on the bike will include Matte Iridium Grey Metallic, Pearl Glare White, and Graphite Black.

The bike will house the familiar Africa Twin sourced engine delivering 100bhp and 76lb-ft from its 1084cc twin-cylinder from its liquid-cooled parallel-twin set-up.

The motorcycle uses ride-by-wire throttle that brings with it a range of high-spec electronic assistance including three default riding modes and two user-configurable options. It will feature three riding modes - Urban, Rain, Tour, along with two User-defined modes - User 1 and User 2. The bike also gets three levels of Honda Selectable Torque Control (traction control), and another three levels of wheelie control to play with.

It is also likely to arrive in the Indian market after its global debut. One can expect Honda to announce its India launch sometime in 2022.