No modifications have been made on the three Respol Honda CBR1000RR bikes and they are still equipped with the original Bridgestone Battlax BT014 tyres with date codes.The bikes have clocked zero miles and will be auctioned individually.
By : HT Auto Desk
| Updated on: 05 Sep 2021, 10:06 AM 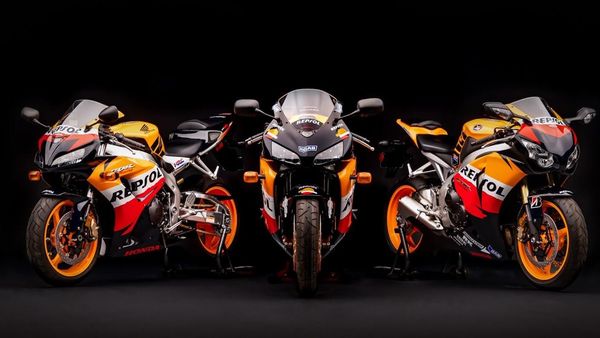 Honda's US arm has donated three Repsol-edition CBR1000RR sport bikes from its private collection, to be auctioned through Iconic Motorbikes. The money raised from it will be used to sponsor the Pediatric Brain Tumor Foundation (PBTF) and the amount will be announced during PBTF's Ride for Kids event on September 12.

The auction that started on September 3 will go on till September 10. The three bikes being auctioned include the Repsol Honda CBR1000RR from model years 2005, 2007 and 2009. All of these have clocked zero miles and will be auctioned individually. These bikes come with special Repsol graphics and were originally offered as a tribute to the factory Honda MotoGP team.

No modifications have been made on these bikes and they are still equipped with the original Bridgestone Battlax BT014 tyres with date codes of 0905 and 1005. Each bike will be sold with one key.

The Honda CBR1000RR sports bike was initially offered in 2004, replacing the CBR954RR. The special-edition Repsol version came the following year, celebrating the first decade of the Honda-Repsol partnership. It imitated the livery of the RC211V race bike.

The 20044 CBR1000RR model was the first full liter-sized model in the CBR double-R range. Though it was powered by an inline-four and not a V5 engine, many parts of bike were based on Honda’s RC211V MotoGP racer - the bike Valentino Rossi used to secure back-to-back world titles.

The CBR1000RR was constructed around an advanced aluminum twin-spar chassis and was equipped with hybrid aluminum swingarm and all-new Pro-Link rear suspension. The 1000RR’s engine was claimed to churn out 172hp and 85ft-lbs of torque with a top speed of over 175mph. The bike also featured 17-inch aluminum alloy hollow-spoke wheels and radial four-piston brakes. The features line-beam headlight and under-tail exhausts.