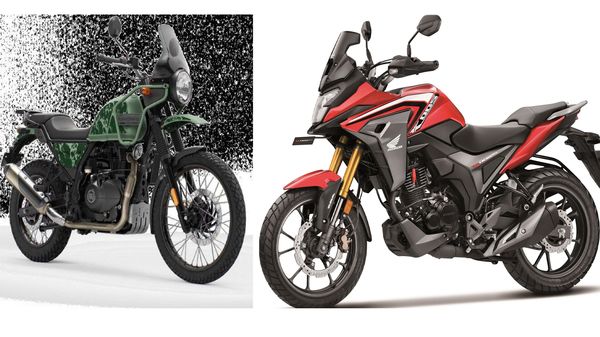 While the Himalayan features a half-duplex split cradle frame, the CB200X comes with a diamond type steel frame.

Honda Motorcycle and Scooter India on Thursday announced the launch of the new Hornet 2.0 based adventure motorcycle - CB200X. It isn't a direct or even a distant rival to the Royal Enfield Himalayan, but sadly there are very few affordable adventure touring options available in the Indian market and entry of one product is bound to make waves significant enough to affect others, directly or indirectly.

Given the segment both the models share, it won't be a mistake to guess that the new CB200X may bite a chunk off the Himalayan's share in the segment, especially with customers having budget restrictions. And this exactly has been Honda's intention with the CB200X, to target an audience between the Hero XPulse 200 range and the acclaimed RE Himalayan.

For starters, the Himalayan packs a bigger displacement engine which is in fact one of the key highlights of its package. To put down the figures, it is a 411 cc single-cylinder powertrain that is able to deliver 24 PS and 32 Nm of peak torque. In comparison, the CB200X has a humble 184cc PGM-FI engine that belts out 17.2 at 8500 rpm and 16.1 Nm at 6000 rpm. Needless to put it this way, but again Himalayan is pretty impressive in terms of engine output, at least on paper.

While the Himalayan features a half-duplex split cradle frame, the CB200X comes with a diamond type steel frame. Both these structures have their own pro and cons.

As far as features go, the CB200X gets a fully digital liquid crystal meter with multiple brightness adjustment levels, on the other hand, the Himalayan (in its latest form) continues along with the multiple dial layout for its meter which also consists of a Tripper Navigation system. LED lighting is standard throughout the CB200X, while Himalayan gets LED on the tail light only.

While the CB200X proudly uses an Upside Down (USD) front fork setup, the Himalayan features a telescopic, 41 mm fork with massive 200 mm travel. Both the ADVs have a monoshock unit at the rear.

The CB200X has been priced at ₹144,500 (ex-showroom, Gurugram), while the Royal Enfield Himalayan has been priced in the range of ₹2.05 - 2.13 Lakh (ex-showroom). Needless to say, there is a momentous gap between the two in terms of cost and thus both appeal to different sets of audiences.

Note: The above feature is purely a specification comparison.