The upcoming iteration of the Royal Enfield Himalayan is likely to be a road-biased model.The previously patented Royal Enfield Scram nameplate could also be used for this derivation of Himalayan.
By : HT Auto Desk
| Written By : Prashant Singh
| Updated on: 31 Jul 2021, 10:27 AM 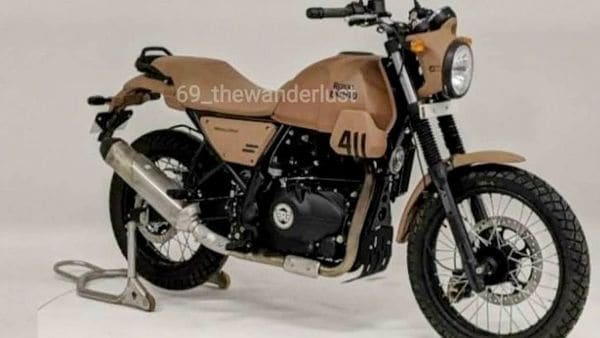 The new Himalayan could be announced at a slightly lower price tag than the existing unit.

Royal Enfield is working on an update to the popular Himalayan adventure motorcycle. The same was recently spotted getting testing on public roads and now its final design has been seemingly leaked via a clay model. It could be named 'Royal Enfield Scram' when launched.

The new upcoming iteration of the Himalayan ADV is said to be a road-biased model, but nothing is officially confirmed at the moment. The overall exterior design of the new Himalayan remains somewhat consistent with minor changes to select body panels. The front windscreen has been completely taken off, as visible from the clay model. The new bike is also devoid of the front rack, while it features tank shrouds bearing the number "411". Eagle-eyed readers would also notice a smaller front wheel that hints towards its road bias. It also features fork gaiters to keep the dust and mud away from squeaking into the front suspension rods.

One of the key updates on this iteration is said to be its new instrument console which won't be just a carryover of the standard model. The new unit will be simpler looking instead of the busier setup with a multi-clock layout seen on the existing bike. The image doesn't quite show the panel but expect a Meteor-inspired layout on the new model. Also, it would most likely feature a Tripper Navigation system, as found on the majority of updated RE bikes lately.

While there is no confirmation on the launch details yet, expect the new Himalayan to be announced sometime later this year, at a slightly lower price tag than the existing unit.