A motorcycle rally with the delivered units of Hero Glamour BS 6 was flagged off in Bengaluru recently.
By : HT Auto Desk
| Updated on: 11 Nov 2020, 17:52 PM 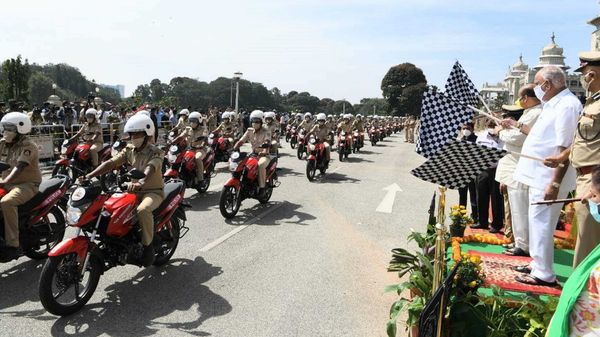 Under the collaboration of Hero MotoCorp with the police departments across the country, the India's biggest two-wheeler maker announced on Wednesday that it delivered 751 units of Glamour BS 6 motorcycle to the Karnataka’s police department.

A motorcycle rally with the motorcycles delivered to police department of the state was flagged off from Vidhan Soudha in Bengaluru, Karnataka by B. S. Yediyurappa, Chief Minister of Karnataka.

The company introduced the new Glamour 125 BS 6 in India a few weeks back. With the yearly update, the motorcycle received a number of updates including company's patent i3S (idle start-stop system). The bike features a 125 cc engine with XSens Programmed Fuel Injection technology which is known to deliver a total output of 10.73 bhp at 7,500 rpm and a peak torque of 10.6 Nm at 6,000 rpm. The engine comes married to a 5-speed transmission. For the braking duties, the bike uses 240 mm front disc brakes, while its ground clearance stands at 180 mm.

The bike maker also launched the 'Glamour Blaze' iteration in the Indian market in October at a price point of ₹72,000 (ex showroom, Delhi). Its features list include a USB charger and a side-stand indicator, and is offered in a choice of Matt Vernier Grey Color and Funk-Lime Yellow graphics.