The Harley-Davidson Pan America adopts a highly unique exterior styling which is different from the traditional ADV designs seen so far.
By : Prashant Singh
| Updated on: 27 Mar 2020, 08:45 AM 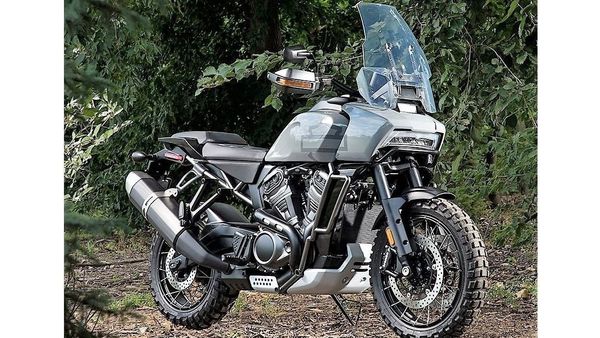 Apart from the Bronx streetfighter, Harley-Davidson India has also updated about the arrival of the Pan America adventure tourer on its official website. The bike will be launched in India in 2020.

The Pan America is Harley-Davidson's first proper attempt in the adventure touring segment. It was revealed to the world in an advanced prototype form at the EICMA 2019 Motorcycle Show in Italy.

The bike sources its power from a 1,250 cc version of Harley-Davidson's new Revolution Max engine. This powerplant features 60-degree, liquid-cooled v-twin set-up with DOHC. It delivers a maximum power output of 145 PS and 122 Nm of peak torque. The engine uses a balancer shaft to keep the vibrations low. This powertrain will also likely power a couple of other models in the H-D line-up as the company gears up to meet the Euro 5 standards.

While the engine output does sound promising, the overall weight of the bike will determine its performance. But from the looks of it, it doesn't appear to be a light-weight motorcycle.

From the exteriors, the Pan America adopts a highly unique exterior styling which is different from the traditional ADV designs seen so far.

At this point, no deeper details are available, but expect it to sport some premium cycle-parts like semi-active suspension, full-colour TFT dash featuring smartphone connectivity, height-adjustable windscreen, riding modes and a new electronics suite.

The company has developed its brakes in coordination with Brembo. The venture has developed a new radial Monobloc four-piston caliper which is claimed to go along well with the overall personality of the H-D's first adventure installment. The company has also worked with Michelin in order to churn out co-branded tyres.

It will be a direct threat to the likes of the Triumph Tiger series and the Ducati Multistrada 1260 series.

As far as pricing is concerned, it may be placed in the bracket of ₹13 lakh to ₹16 lakh (ex-showroom).