The Harley-Davidson Bronx has been developed in order to attract a wider set of younger audience which needs something more intimidating than regular cruiser motorcycles.
By : Prashant Singh
| Updated on: 26 Mar 2020, 16:04 PM 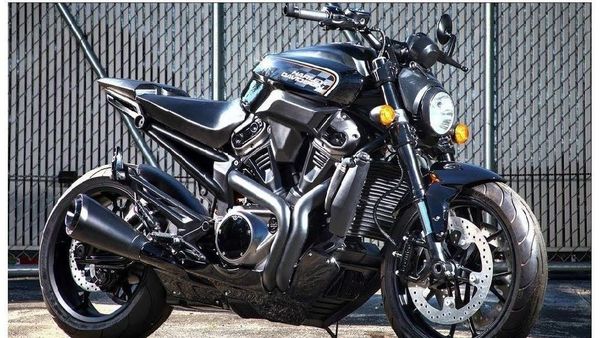 Harley-Davidson Bronx has been confirmed for India launch in 2020. The company has updated its official webpage with the announcement of its arrival this year.

Harley-Davidson has dabbled into the naked/ muscle with the Bronx which comes out as a completely brand new product from the legendary American bikemaker.

The Bronx sources its power from the company's new 975cc 60-degree V-twin liquid-cooled power plant. The engine is counterbalanced and comes with dual downdraft throttle bodies for better performance. The engine is claimed to deliver over 116 PS of maximum power and 95 Nm of peak torque. It is said to have a broader powerband and thus rev up to high rpms, lending it a sporty character.

As per the company, the engine has a narrow profile and it is a stressed member of the frame. Harley-Davidson has also taken cared of its lower centre-of-gravity which is aimed at improving its overall handling. What's rather interesting to note is that it gets a belt drive setup.

In terms of cycle parts, the Bronx uses a separate function inverted fork setup at the front, while the rear-section uses a monoshock suspension.

The Bronx has been developed in order to attract a wider set of younger audience which needs something more intimidating than regular cruiser motorcycles. The Bronx may not be an outright rival to the conventional supernakeds, but it will share the same segment say as some sub litre-class streetfighters such as the Kawasaki Z900, 2020 Triumph Street Triple RS and the KTM 790 Duke.

In comparison to the rest, it will be a more brawny and muscular offering. It will have its own class and will attract a different set of audience. Expect it to be priced in the range of ₹13 lakh to ₹15 lakh (ex-showroom).

While Harley-Davidson India has only confirmed about its 2020 arrival, we suspect the launch date to fall around last quarter of this year.