Harley-Davidson is pushing the envelope with new body styles. Soon, its line-up won't just be restricted to cruisers and baggers.
By : Prashant Singh
| Updated on: 03 Apr 2020, 01:56 PM 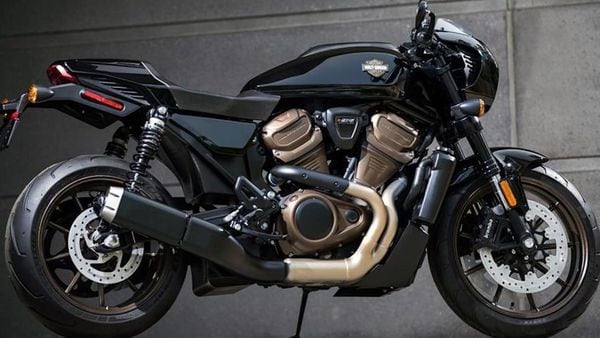 Harley-Davidson in the last few years has introduced some big changes in its line-up. From developing an all-electric bike whose future existence is questionable, to trying hands at the adventure-touring segment, Harley-Davidson has let loose all horses to hold still the falling sales.

While the Pan America and Bronx streetfighter are both slated for 2020 launch, the company has now already started working on new concepts. It is pushing the envelope with new body styles and soon, its line-up won't just be restricted to cruisers and baggers.

Investor documents from 2019 show that the company has started developing two all-new bikes, a cafe-racer and a flat-track inspired model.

Apart from this, there is also a flat-track inspired motorcycle with a high-mounted exhaust system, wide handlebars, flat seat and silver finished engine, clutch cover and exhaust pipes. With the latter, Harley-Davidson might have an Indian FTR 1200 rival in mind. While its black and gold cafe-style bike will have a couple of competitors such as the Triumph Thruxton R, and Kawasaki Z900 RS. As far as specifications or technical details are concerned, there is absolutely zero data available on the bikes as of now. While commenting on their engine displacement will only be a wild guess, what's certain at this point is that the bikes have been equipped with the company's Revolution Max engine series that's also found on the Bronx and the Pan America motorcycles.

In other updates,the company will launch Bronx as well as Pan America in the Indian market. Both the models have been listed online on the Harley-Davidson India's official webpage with a tag 'Coming in 2020'.