Harley-Davidson Fat Bob has been temporarily taken down from the company's official web-page which includes the new 2020 line-up.
By : Prashant Singh
| Updated on: 28 Mar 2020, 09:45 AM 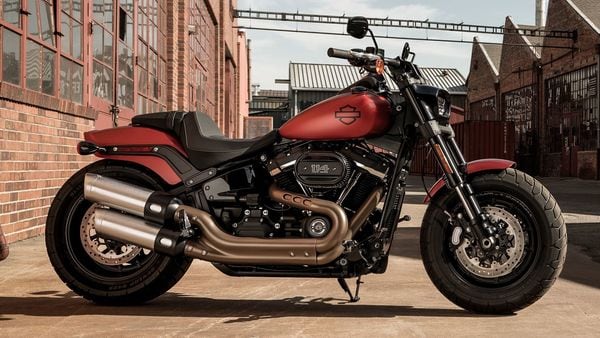 Harley-Davidson Fat Bob will not be receiving the required BS 6 update anytime soon like the rest of the line-up. The model has been temporarily taken down from the company's official webpage which includes the updated models.

On the other hand, the company has already disclosed pricing of the majority of its BS 6 updated bikes.

While the bike maker is tight-lipped about the arrival time of the 2020 Fat Bob BS 6, we expect it will be unveiled anytime around mid-2020.

The Fat Bob is one of the most famous bikes in the Harley-Davidson's portfolio. In the previous BS 4 avatar it sourced power from a 1,745 cc Milwaukee-Eight 107 powerplant with Electronic Sequential Port Fuel Injection (ESPFI) technology. The engine was known to churn out 145 Nm of peak torque at 3,250 Nm. The engine came mated to a 6-speed gearbox.

In other updates, Harley-Davidson India has started retailing its entry-level Street 750 and Street Rod bikes from the CSD departmental stores for defence personnel. While the Street 750 is sold at an ex-showroom price of ₹5,34,000, and the Street Rod is priced at ₹655,500, their respective CSD prices have been kept lower at ₹4,60,332, and ₹5,65,606.

Harley-Davidson Inc. on Thursday pulled-out its financial forecasts as the COVID-19 outbreak hurts its supply chain. The company warned further disruptions could damage its ability to supply and retail motorcycles. The company also said that it is going to shut majority of the production at its facilities in Pennsylvania and Wisconsin, starting March 18 through March 29, 2020.