The latest European-spec Honda CB300R gets an updated paint scheme along with new features and a more powerful engine.
By : HT Auto Desk
| Updated on: 25 Jan 2022, 12:48 PM 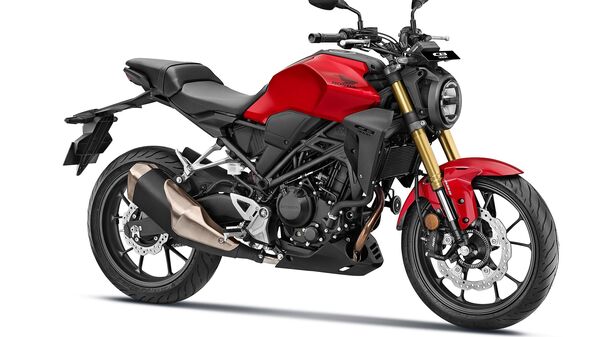 The new CB300R has made its introduction with subtle styling updates which lend the bike a fresher look. The motorcycle continues forward with its neo-retro design but gets a new black paint scheme which appears to be similar to the Matte Steel Black shade offered in the India-spec model. Other than this, the motorcycle has also received a black headlamp bezel and darker radiator cowls. Moreover, its exhaust can have been made slightly more angular than found before.

The motorcycle has now been made available in a total of four colour options -Pearl Dusk Yellow and Matt Pearl Agile Blue (both new for 2022), Matt Gunpowder Black Metallic and Candy Chromosphere Red.

Some of the key features of the new model include its LED headlamp with a dual-bar setup, LED taillight and turn indicators and a fully digital instrument console with a negative LCD display. However, the motorcycle continues to miss any connectivity features.

At the heart of the motorcycle continues to sit a newly updated 286cc, DOHC, 4-valve, liquid-cooled single-cylinder engine. The overall output from this motor now stands at 31.1 bhp at 9,000rpm, while previously it used to churn out 30.4 bhp at 8,000rpm. The overall torque output remains the same at 27.5 Nm. The engine comes mated to a 6-speed transmission which now also sports an assisted slipper clutch for smoother and quicker gear shifts.