The new Panigale V4 SP is the flagship offering from Ducati in India. Ducati Panigale V4 SP comes with an STM EVO-SBK dry clutch, made from billet aluminium.
By : Prashant Singh
| Updated on: 18 Nov 2021, 11:13 AM 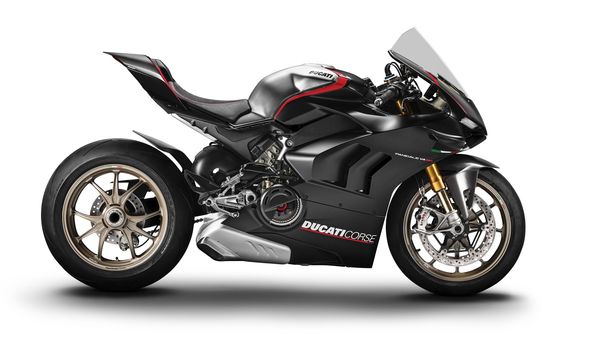 Ducati India on Thursday announced the launch of its new flagship superbike in the country, the Panigale V4 SP. The motorcycle has been priced at ₹36,07,000 lakh in India (Ex-Showroom). The company has already initiated bookings on the new Panigale V4 SP at all its authorised dealerships in India. The deliveries are also set to begin immediately.

The new Ducati Panigale V4 SP differs from the standard Panigale V4 S with its dedicated livery, steering head machined from billet which shows the progressive number of the bike, more premium equipment and a race-tuned engine.

The bike comes with the new “Winter Test" livery that takes inspiration from the Ducati Corse bikes used in the pre-season tests of the MotoGP and SBK Championships. This sets it apart from the standard Panigale V4 S. It features matt black on the fairings, combined with the Marchesini Forged Magnesium Wheels, and contrast bright red accents that leak through the exposed brushed aluminium tank.

Bits that make truly make it a track-ready machine include the carbon front mudguard and the adjustable rider footpegs in billet aluminium which can be set up as per the rider's preferred position in the saddle. It also gets several track days oriented accessories such as the open carbon clutch cover, caps for removing the license plate holder and mirrors, as well as the Ducati Data Analyzer + (DDA +) telemetry kit with a GPS module that allows the rider to analyse the performance professionally.