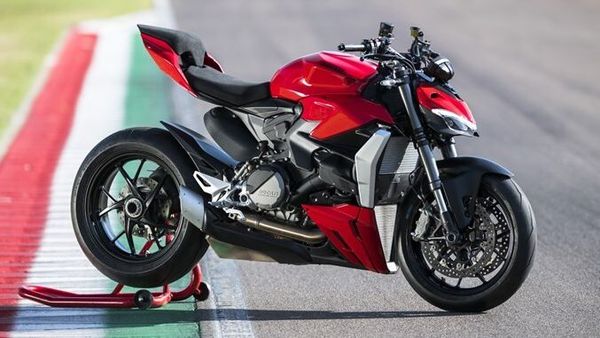 As part of the latest installment of its virtual series, Ducati has taken the wraps off the new 2022 Streetfighter V2 motorcycle. The new Streetfighter V2 uses the same platform as the Panigale V2, but it is placed lower than the flagship Streetfighter V4 that was launched previously.

Needless to say, the exterior design of the new Streetfighter V2 comes based on its bigger counterpart. The headlamp assembly appears to have been borrowed straight from the Streetfighter V4 while other parts such as the fuel tank, tail section, and wheels scream Panigale V2. The alloy wheels on the new bike are identical to the Panigale V2 and come shod with Pirelli Diablo Rosso 4 tyres. It also gets optional wings that are responsible for producing 27kg of downforce at 265kph.

At the heart of the new Ducati Streetfighter V2 sits a 955cc, Superquadro, twin-cylinder engine. You must have guessed it by now, it is the same engine that powers the Panigale V2. However, in the naked hooligan, the engine makes slightly less power and torque at 153hp and 101.5Nm respectively. The transmission includes a six-speed gearbox with an up/down quickshifter which is offered as standard.

This powertrain is housed under a cast aluminium monocoque frame that uses the engine as a stressed member. While the single-sided swingarm on the Streetfighter V2 is 16mm longer than the one found on the Panigale V2. In terms of overall weight, it tips the scales at 178kg (dry) which is precisely 2kg more than the Panigale V2.

Some of the key electronics on the latest Streetfighter include cornering ABS, traction control, three power modes (High, Medium, Low) and three ride modes (Wet, Road and Sport), wheelie control, as well as engine braking. The meter console on the bike is a 4.3-inch colour TFT cluster that can be used to access all the settings and modes.

For suspension, the bike uses a fully adjustable 43mm Showa Big Piston USD fork and a Sachs monoshock at the rear. While the braking is taken care of by the same Brembo M4.32 monobloc found on the Panigale V2.