Ducati has lined up several new launches for this year starting with new bike announcements very next week.As seen before, the Panigale V4 will be sold in both Standard as well as S variants.
By : HT Auto Desk
| Written By : Prashant Singh
| Updated on: 04 Jun 2021, 11:14 AM 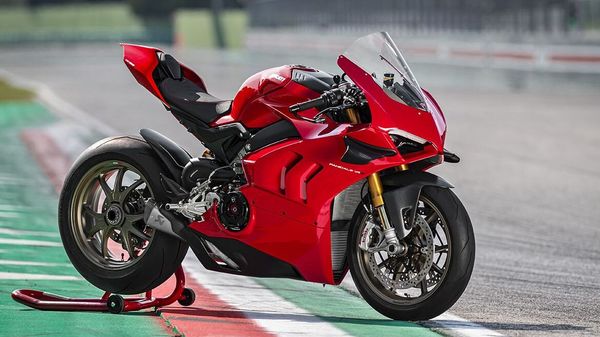 The Panigale V4 will be sold in both Standard as well as S variants.

2020 was quite a dull year for the Indian premium bike market seeing the challenges thrown by the Covid-19 pandemic. There were no major launch announcements by Ducati last year, save for the updated Panigale V2. However, the company has lined up several new launches for this year starting with new bike announcements next week.

While the company is yet to officially inform the arrival of new bikes in June, it has now teased the Panigale V4 BS 6. Sources suggest that the new motorcycle will be introduced in India on June 7th (Monday).

Breathe in, breathe out.
We are nearly there. #ComingSoon pic.twitter.com/uk0NONfMsc

The Panigale V4 received major changes in 2020. It was given winglets, a retuned chassis and suspension setup, in order to make its performance more manageable. While the 2020 model was never officially shown green light in India, select units of the models were brought in for the customers on special demand.

The new 2021 V4 is almost similar to the previous year's model. It is compliant to BS 6 emission norms, and sources power from a 1,103 cc V4 Desmosedici Stradale engine that delivers 211 bhp of maximum power at 13,000 rpm backed up by 124 Nm of peak torque output at 9,500 rpm. The engine is paired to a 6-speed transmission.

As seen before, the Panigale V4 will be sold in both Standard as well as S variants. Both the trims will employ the same engine tuning and electronics package, however, the premium-spec 'S' trim will feature electronically controlled Ohlins suspension, forged aluminum wheels, a lithium-ion battery, and lesser weight (195kg).

(Also Read: Things to consider when buying a used superbike)

When launched, expect the bike to cost somewhere between ₹22 lakh and 27 lakh (ex-showroom).