With the latest model year update, the Triumph Trident 660 receives a new colour option, while the rest details remain unchanged.
By : HT Auto Desk
| Updated on: 23 Jun 2022, 09:45 AM 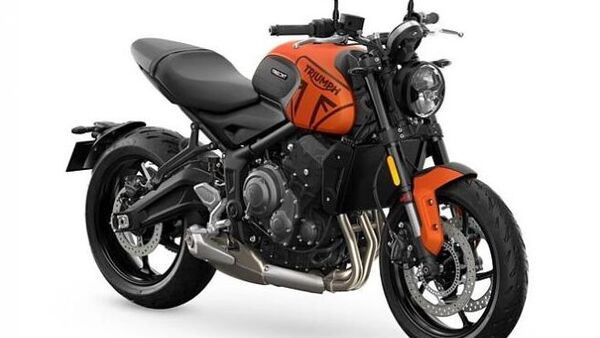 Trident 660 has been updated with a new Matt Bajaj Orange paint scheme for refreshed exterior looks.

Triumph Motorcycles India has rolled out the yearly updated 2022 Trident 660 motorcycle. The bike was introduced in the international markets back in May'22. And only a month later it has gone on sale in India. The pricing of the new bike has been kept at ₹7.58 lakh (ex-showroom).

The latest 2022 Trident 660 continues to be powered from the same 660cc, inline-three cylinder engine. This powertrain has been rated to produce 79.8bhp of maximum power and 64Nm of peak torque. The engine comes paired to a six-speed gearbox and also gets a standard assist and slipper clutch.

Some of the key highlights of the model include the use of two riding modes, Bluetooth instrument cluster and full-LED lighting as well. It faces heat from the middleweight models in India such as the Kawasaki Z650 and Honda CB650R in India. Apart from the new Trident 660, the company is also expected to roll out several new 2022 edition models in the country in the next few weeks.

Meanwhile, internationally it has finished the testing of its TE-1 electric motorcycle which is expected to break cover later this year in its production-ready form. This has been developed in collaboration with Williams Advanced Engineering, Integral Powertrain Limited and Warwick Manufacturing Group (WMG) at the University of Warwick.