The yearly updated CFMoto 300SR model has received a new exterior paint theme while the rest of the bits remain unchanged on the motorcycle.
By : HT Auto Desk
| Updated on: 29 Jan 2022, 10:11 AM 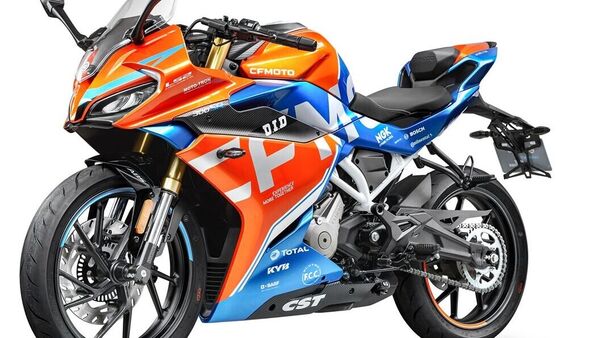 The 2022 model comes covered in orange and blue with white graphics and a bold CFMoto logo on the side panels.

Chinese manufacturer CFMoto has announced the introduction of its new 2022 300SR motorcycle for the Australian market. The yearly updated model has received a new exterior paint theme while the rest of the bits remain unchanged on the motorcycle.

The 2022 model comes covered in orange and blue with white graphics and a bold CFMoto logo on the side panels. This newly added option joins the already available Nebula Black and CFMoto’s signature Turquoise Blue paint scheme. While the body panels and the overall design of the bike remain unchanged, the new bike's LED headlamps now appear to be even more aggressive.

At the heart of the bike sits the same 292cc, single-cylinder engine that churns out 30bhp of maximum power and the transmission is a 6-speed unit. At this output, the bike competes in the territory of the KTM RC200 sports bike. The 300SR motorcycle gets a fairly low 780mm of seat height and it comes packed with features like a TFT display with connectivity, ride modes, LED lighting and dual-channel ABS, the CFMoto aims to offer decent value.

While it has been introduced in the market of Australia, chances are slim that it will be launched in India anytime soon.

Meanwhile, the company has recently rolled out the new 250 CL-X quarter-litre neo-retro roadster motorcycle which comes based on the popular CFMoto 250NK naked motorcycle. It also sits as an entry-level version of the 700 CL-X motorcycle and also uses the same exact underpinnings as the CFMoto 250NK. (Find more details here)