The Yamaha XSR125 looks nearly identical to the XSR155 save for the fact that it is slightly taller than its bigger displacement counterpart.
By : HT Auto Desk
| Written By : Prashant Singh
| Updated on: 12 May 2021, 01:02 PM 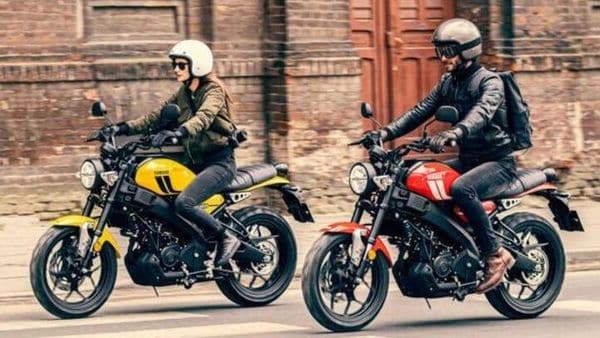 Chances are slim that the XSR125 will make its appearance on Indian soil anytime soon.

Yamaha has expanded its 125 cc motorcycle portfolio with the introduction of the new XSR125 neo-retro roadster in the European market. The bike is based on the same engine platform as the MT-125 and R125.

The XSR125 sits lower than the XSR155 and has been developed solely for daily commutes. It also comes packed with a range of new features that promise to make it a fun bike for daily city riding.

On the outside, it carries the same looks and design as the bigger XSR155 which makes it a fairly unique model to look at. It sports a circular headlamp residing inside a black dipped outer housing. Down below sits USD front forks and body-coloured fender. The fuel tank sports a black strip which adds to a sportier appeal on the bike. It then gels-in with a roll and tuck single seat and there is also a small-sized circular tail light that contributes to its neo-retro appeal.

The XSR125 looks nearly identical to the XSR155 save for the fact that it is slightly taller than its bigger displacement counterpart. The XSR125 is 10mm taller, perhaps due to the suspension being tuned on the firmer side for the European market.

Powering the Yamaha XSR125 is a 125cc single-cylinder engine that delivers15 PS of power and 11.5 Nm of peak torque. The transmission option includes a 6-speed manual transmission.

Chances are slim that the XSR125 will make its appearance on Indian soil anytime soon, on the other hand, Yamaha Motor India is gearing up for the launch of the FZ-X which will be based on the FZ-FI motorcycle.