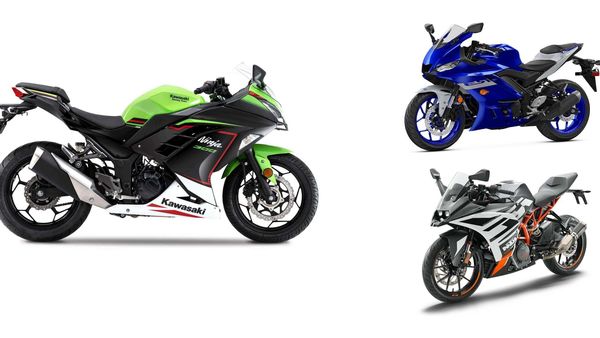 Kawasaki India has recently launched the newly updated Ninja 300 sports bike in the market at a price tag of ₹3.18 lakh (ex-showroom). The new model has become costlier by ₹20,000 against the model it replaces. For the record, the BS 4-spec bike was discontinued in India in late 2019.

Save for the new colours, there aren't any significant visual changes to speak of. At the heart of the 2021 Ninja 300 sits a new Euro 5/BS 6-compliant 296 cc, parallel-twin, liquid-cooled engine which continues to deliver 38.4 bhp of maximum power and 27 Nm of peak torque. The engine comes mated to a six-speed gearbox along with an assist and slipper clutch.

Here is how the new Ninja 300 compares with its segment rivals in terms of pricing:

KTM RC 390 is one of the most popular products in the segment. It has made name for being one of the sportiest sport bikes under the sub-500 cc category. It is built around a lightweight tubular steel trellis frame and comes with features such as USD front forks, steel braided brake lines, a fully digital instrument console, and more. It sources power from a 373 cc single-cylinder engine which delivers 42.9 bhp. In fact, KTM is also planning an update on the new RC 390 which is expected to roll out next year.

The Yamaha YZF R3 is a direct rival to the Ninja 300 and the KTM RC 390. Though it has been discontinued from the Indian market, it will be re-introduced later in 2021 in a new avatar. It will be powered by 321 cc engine which is expected to deliver around 43 bhp of maximum power.