2021 Ducati Panigale V4 sits higher than the Panigale V2 which was introduced in India in 2020.The Ducati Panigale V4 comes kitted with the latest-generation electronics package that comes based on the 6-axis inertial platform.
By : HT Auto Desk
| Updated on: 07 Jun 2021, 01:23 PM 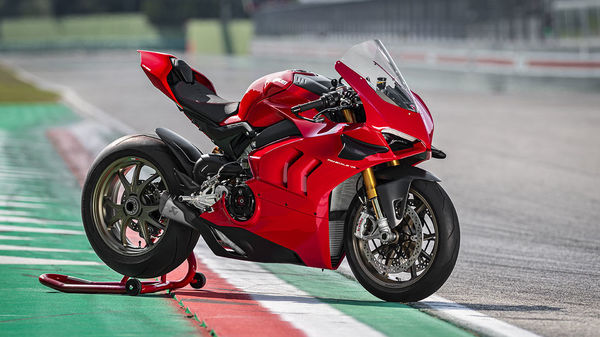 The Panigale V4 has been launched in both Standard as well as S variants.

Ducati India on Monday announced the launch of the 2021 Panigale V4 sports bike in the market at ₹23.50 lakh (ex-showroom). The Panigale V4 sits higher than the Panigale V2 which was introduced in India in 2020.

The Panigale V4 was given heavy updates last year. It received winglets, a retuned chassis and suspension setup for enhanced performance, and in the process, it also became more manageable to ride. While the 2020 model was never officially launched in the Indian market, select units of the model were brought in for the customers on special demand.

The latest iteration of Ducati's flagship sportsbike sources power from a BS 6-compliant 1,103 cc V4 Desmosedici Stradale engine that is known to produce 211 bhp at 13,000 rpm and 124 Nm of peak torque at 9,500 rpm. The engine comes married to a 6-speed transmission.

Both the Standard and S trims employ the same engine tuning and electronics package, however, the premium-spec 'S' trim benefits from an electronically controlled Ohlins suspension, forged aluminum wheels, a lithium-ion battery, and lesser weight (195kg).