Ola Electric CEO Bhavish Aggarwal emphasized on the quality checks and the high use of technology at the EV maker's FutureFactory.
By : Shubhodeep Chakravarty
| Updated on: 24 Apr 2022, 09:55 AM 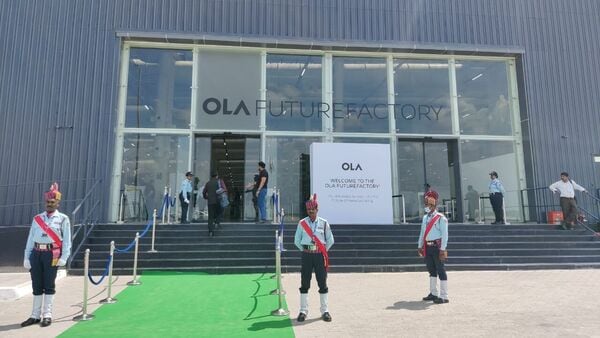 A number of electric scooter makers have had a tumultuous past few weeks owing to incidents of fire in their respective products. One of the big names in this list is that of Ola Electric, a company that has seen its fair share of controversies despite enjoying a massive response for its debut product - the S1 Pro electric scooter. Ola Electric claims it has a huge order book for the model and that it is consistently ramping up production at its factory in Tamil Nadu. But the bigger question emerging is what about safety. While Union Minister Nitin Gadkari has taken a grim view of fire-related incidents reported in products from various brands, he has also warned of penalty if a company is found to have erred, a move that is actually welcomed by Ola Electric CEO Bhavish Aggarwal.

Speaking at a factory visit for members of the media on Saturday, Aggarwal continued to back the quality of electric scooters manufactured by his company while admitting that there may be the rare issue. "That is true of any product, whether electric or gasoline powered," he said when asked about the fire incident involving an S1 Pro scooter in Pune recently. "I am not saying there are no issues at all but our rate of fix is one of the best because most (of these issues) is software based.

To specific queries about the Pune fire incident, Aggarwal said that the incident is being investigated and that the company is awaiting a report, not ruling out the possibility of a recall order. Meanwhile, an official committee has also been formed by the government to investigate the incident.

On the matter of EV makers potentially facing penalty if found guilty of erring with quality, Aggarwal attempted to put on a brave face by emphasizing on the quality checks and the high use of technology at the Ola Electric FutureFactory. "We support very high standards and the need for regulations. Our products meet European standards because these EVs are also for exports. We follow a high standard here in India as well and if there are penalties for those who don't, I support it," he said, adding that while EV companies have to collectively raise the quality base, there are also several well-established global brands that have had fire-related incidents. "Has the odd Tesla not caught fire. Brands globally like Hyundai and GM have had incidents. What is needed is a strong standard, audits and checks which need to be established."

But while Ola Electric cannot be faulted for dreaming big and entering the personal mobility space with a whole lot of enthusiasm, many feel the company ought to focus on the basics which also includes the novel direct-to-home delivery model. Critics have also argued that the company is guilty of batting T20 style in a Test match game. For Aggarwal though, the confidence of winning irrespective of the match and pitch conditions appears quite high. Will Ola Electric manage to charge forward on its ambitious path, this remains to be seen.