What happens when a Jeep Grand Cherokee gets struck by lightning? Watch here

A Jeep Grand Cherokee in Kansas in the US is seen struck by lightning.The SUV's lights were out and it stalled right after the lightning strike.
By : HT Auto Desk
| Updated on: 07 Jul 2021, 15:28 PM 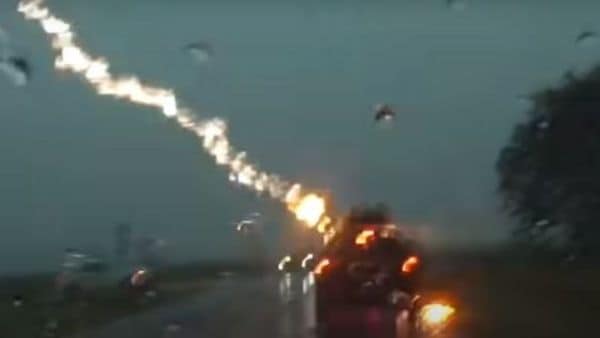 The Grand Cherokee was slowly advancing on a rain-drenched road when the lighting struck the car. (Image: YouTube/LSM)

Car dashcams often pick up unbelievable footage. A vehicle being struck by lightning is one such stunning and frightening footage.

Footage from a car's dashcam has landed on the internet showing how a Jeep Grand Cherokee was hit by lightning, not once but as many as four times. The incident happened in Waverly, Kansas in the US.

The video shows there is a massive thunderstorm and a Jeep Grand Cherokee is approaching an intersection of the roads, while a bolt of lightning strikes it. Three more lightning strikes hit the SUV in quick succession.

The person who uploaded the video on YouTube claims that there was a family of five in the SUV. They all reportedly escaped the incident without any injury.

Modern cars come with a host of safety features and shockproof systems as well. This means a chance of severe damage to the critical systems inside a vehicle is unlikely. However, mishaps are exceptions and that can happen anytime. Hence, driving during a thunderstorm or lightning is not recommended unless it is absolutely necessary.