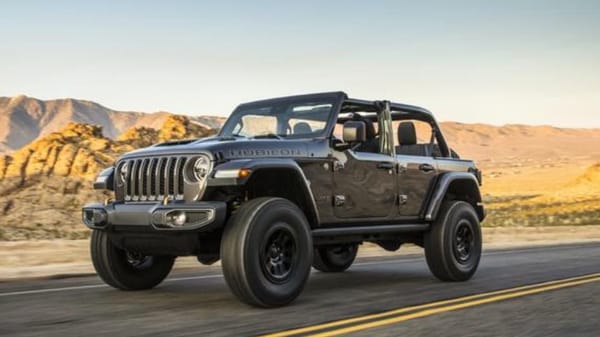 The new Jeep Wrangler Rubicon 392 comes as a well-capable offroader.

If you remember the wooden Bugatti and battle tank projects by YouTuber named Woodworkingart, you probably also remember how astonishingly detailed these projects were. Now, the same person has made a Jeep Wrangler Rubicon 392 that looks like all set to conquer the Moab. The detailing of the Jeep Wrangler Rubicon 392 makes it a perfect-looking wooden scale model. The Vietnamese YouTuber has made several wooden car models in the past, and the V8-powered four-door Wrangler Rubicon replica is the latest that he showcased on his channel.

The video reveals how the wood artist made the rolling SUV from blocks of wood. He even lodged the replica of the eight-cylinder engine under the hood with distinctive features, despite it being concealed for most of the time. The car comes with clear windows, allowing anyone a peek into the cabin without opening the doors. The wood-carved version of the SUV comes with several movable and removable parts as well, just like the real Jeep Wrangler Rubicon 392.

Jeep started rolling out the Wrangler Rubicon 392 back in 2021, and since the beginning, it has remained a coveted vehicle. It was the first-ever Wrangler SUV to come equipped with a V8 engine right off the factory.

Jeep priced the Wrangler Rubicon 392 heavily at $73,500, which is notably even higher than Ram TRX. The SUV also comes adding another $1,495 as a destination charge. The wooden scale model of the car appears perfect for those who are unable to take home the real SUV.