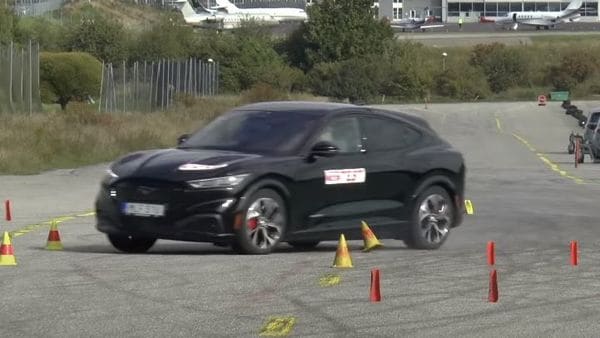 Driving a Ford Mustang is not a very easy task. Driving this high-performance car requires precision and superior driving skills. The same skill set is applicable for the Ford Mustang Mach-E. The electric crossover bearing the iconic nomenclature might not be exactly the favourite for Mustang lovers, but it comes with some iconic characteristics of the pony car.

It is not easy to perform well in a moose test with a high-performance car. Ford Mustang's electric crossover sibling too is no different. Recently a video has emerged online, showing a Ford Mustang Mach-E electric crossover's poor emergency handling, even when the car was driving at just 68 kmph speed.

The electric crossover's backside stepped out in a dramatic manner during the second turn of the moose test. The EV tossed a few cones before regaining control for the final manoeuvre. When the car hits a speed of 72 kmph, the Mach-E leaves the course entirely without finishing the last section.

Interestingly, Tesla Model Y completed this same test at 75 kmph without any mistake. Another Ev, Hyundai Ioniq 5 too took the test at a speed of 72 kmph and passed without any trouble. The Ioniq 5 appeared most composed among the three electric crossovers. The Mustang-Mach-E appeared unsafe from a driving perspective.

The moose test video reveals the Ford Mustang Mach-E's stability control is not performing what is supposed to. The car's back remained heavy and lagged in movement. The chassis and steering wheel of the car to0o have faults. However, it is not known if the test Mustang Mach-E was an all-wheel-drive or rear-wheel-drive model.

Ford introduced the Mustang Mach-E to the world in November 2019 and started selling the car in December last year. This Ev is expected to come to the Indian market as well, as Ford has hinted a few days ago.