The Hyundai Elantra N-Line will feature several performance updates over the regular model. Elantra is the company's fifth car to be given the performance-oriented N-Line treatment.
By : Prashant Singh
| Updated on: 01 May 2020, 09:13 PM 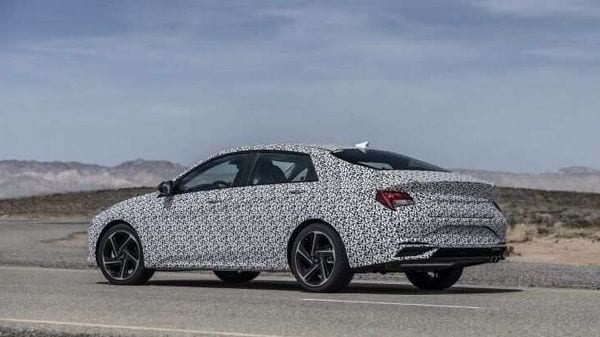 Hyundai Elantra N-Line will make its international debut in 2021.

Hyundai has just dropped an official action trailer of the first-ever Elantra N-Line (Avante N-Line). The video reveals the bassy exhaust note of the Elantra's performance variant, while giving a glimpse of its sportier exteriors.

Hyundai is rapidly increasing the count of its performance oriented N-Line variants lately. After Hyundai i30, Hyundai i30 Fastback, Hyundai Tucson and Hyundai i10, the Elantra is now company's fifth official car to have received the N-Line treatment.

The video (below) intends to show the 'sportier' side of the Elantra N-Line which has presumably acquired a number of performance oriented updates.

The videoed unit is seen undergoing track test under a heavy camouflage which hides away the new styling tweaks. But, it would be safe to assume that the car will feature some general styling changes as seen on previous N-Line models such as sportier grille and bumpers, bigger air inlets, unique alloy wheels, twin-tip exhaust outlet and N Line badges.

Speaking of the mechanicals, the car will most likely run on a 1.6-litre T-GDi turbocharged direct-injection petrol powerplant belting out a maximum power of 200 PS. This unit may feature two gear-box options - a 6-speed manual and a 7-speed dual-clutch transmission.

Along with the engine, it will also be updated with a sportier suspension set-up, lowered ride height, and lighter component to boost its overall performance.

Expect it to go on-sale in the international market by 2021, but India will most likely be skipped from the list.

(Also Read: Maruti and Hyundai will resume production in May but with lower capacity: Report)

While the South Korean market already has the new-gen Elantra, expect the same to reach the Indian shores next year.