The modified Tesla Model 3 charts its own way up snowy slopes courtesy snow tracks on its rear axle.
By : Shubhodeep Chakravarty
| Updated on: 12 Feb 2020, 10:18 AM 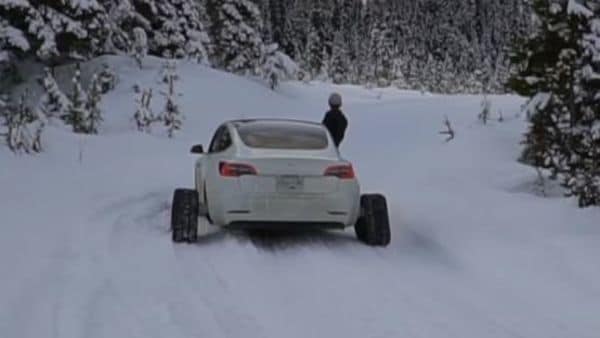 Over the years, several owners have made several eye-catching modifications to their Tesla cars - some practical while others outrightly outlandish. And then there is Michael, a Youtuber, who hit viral fame by showcasing his $40,000 premium sedan complete with snow tracks on the rear axle to help its chart its way through snowy slopes.

Michael's Youtube channel lowlifeduramax showcased the modified Tesla Model 3 which was bizarrely fitted with snow tracks at the rear wheel, much like the set up in a battle tank. He claimed he undertook the project as an experiment and by what the video shows, Michael may have been successful. "She rides nice, no complaints. It drives up hills like it’s nothing," he said.

Michael completed the project with the help of Mullin Manufacturing and said that his next experiment would replace the snowy terrain with mud tracks to see how well the Model 3 can hold up.

The video, understandably, has raked up sizable views and Michael reportedly has plans of taking the experiment to other Tesla owners if the demand and need arises around it.

Such modifications to a premium sedan like Model 3 from Tesla, however, is hardly advisable as it has the potential of affecting the driving abilities of the vehicle in the long run and on regular terrain.

Besides, Tesla has audacious plans of making vehicles capable of making mincemeat of any terrain. Last year, the company showcased the Cybertruck, its electric super truck which can also be home to the Cyberquad ATV from Tesla. The company has not confirmed much about the ATV but reports suggest that it could be a highly-capable vehicle, making use of electric power, to help adventure enthusiasts roam free and wild. As such, a Model 3 may well be best suited to regular tarmac and does offer quite a lot to keep the driver and passengers engaged in a technologically advanced cabin.